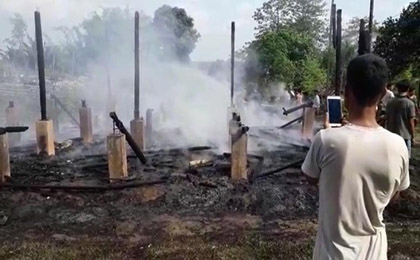 Staff Reporter
ITANAGAR, Jun 5: Three dwelling houses were gutted to ashes in a fire incident at Kamcham village under Kangku circle in Lower Siang district on Wednesday.
The fire broke out around 1:45 PM this afternoon and the cause of the fire incident is reported to be electric short circuit, police source said.
The authority is assessing the total fire damage and loss of properties in the fire incident, sources added.
A source from the fire service department, Likabali said, ‘As soon as we received the information, we rushed to the fire spot … three houses gutted along with households in the fire mishap.’