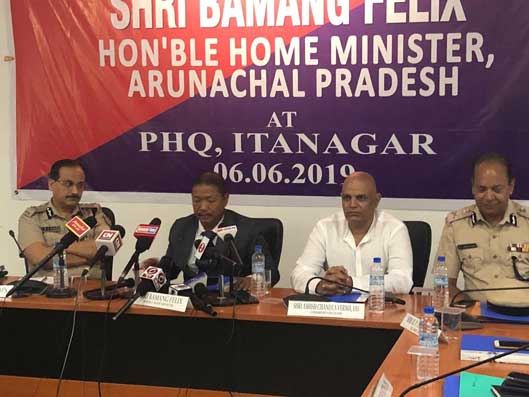 Staff Reporter
ITANAGAR, Jun 6: Home Minister Bamang Felix on Thursday denied there was any record of taxes being paid to underground elements by the government employees in Tirap, Changlang and Longding (TCL) districts.
Felix said this in reply to a question on payment of certain percentage of the salaries of the government employees to the underground organizations operating in the three districts. He was addressing his first press briefing as home minister, at the police headquarters here.
Various factions of the NSCN are active in the TCL region.
Meanwhile, Director General of Police (DGP) SBK Singh, who accompanied Felix at the briefing, said “the police department alone cannot be squarely blamed for intelligence failure” with regard to the assassination of Khonsa MLA Tirong Aboh.
In a defensive mode, the DGP Singh said, “We have resources, we work on that, we know what the problems are. It’s a question of the people getting into confidence to share.”
On being asked why the slain MLA had not been provided with adequate number of security personnel despite there being a threat perception against him, Singh said four personal security officers had been provided to Aboh, and that, while two of them were killed along with Aboh, one was injured and one escaped unhurt.
The DGP also said the police have requested the army to deploy more forces to dominate the area and seal off the international border with Myanmar and the interstate boundary with Nagaland.
Meanwhile, Felix said the home department will launch its ‘Hamara Arunachal’ campaign, involving all stakeholders, including student leaders, youths, and community-based organisations, to create awareness on the need to maintain law and order in the state.
“Chief Minister Pema Khandu will kick off the campaign,” Felix informed.
He said the campaign “is not only for the home department but for the people of the state.”
Felix informed that the home department and the police have had their first review meeting.
“We had very elaborate and comprehensive discussions over departmental issues and the law and order situation across the state. We have committed ourselves to bring back the tag of ‘the island of peace’ to Arunachal,” he said.
Felix also informed that his department is creating an ‘anti-riot battalion’ to deal with law and order problems.
“I would like to thank the chief minister for taking seriously the law and order front. The department has already taken the decision to provide 1000 more police personnel of different ranks, and is committed to incorporate in the forthcoming budget the creation of an anti-riot battalion for the state,” said Felix.
The home minister appealed to all the stakeholders to assist in maintaining law and order in the state.
Home Commissioner Ashish Chandra Verma was also present at the press briefing.