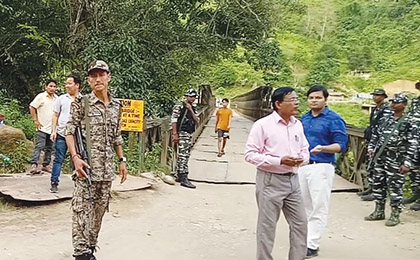 [ Karda Natam ]
DAPORIJO, Jun 12: The Upper Subansiri district administration began repair work on the bailey bridge here over the Subansiri River on 11 June. The bridge has been in a precarious condition since the past several days.
Deputy Commissioner Danish Ashraf is supervising the maintenance work at the site in Daporijo.
As the administration has stopped plying of vehicles, many heavy vehicles carrying goods are stranded on either side of the bridge.
Earlier, an executive order was passed restricting heavy vehicles from using the bridge till it is repaired.
Police personnel have been deputed on both ends of the bridge to stop plying of heavy vehicles.
Further, due to partial damage to Bailey bridge at Tamin, over the Kamle River, all vehicles from Daporijo to Itanagar have been diverted via the Silapathar road.