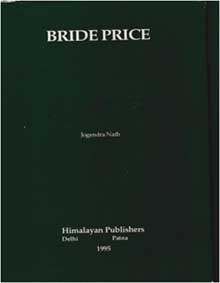 Late Lummer Dai was not only the first novelist in Arunachal Pradesh, but also a great social critic who used his work of art as a weapon to change the society. He was a novelist with a purpose. He dared to discuss social issues in his fictions. Like a social reformer, he made deliberate effort to spread awareness to reform society towards better life. Through his literary offering he intends to get rid of social vices.
Dai does use Geken in Bride price to express his belief about the social customs that are rinse in the colour of prejudice: “is it the same custom that prevailed at the time of Abotani? I say it is not…the rules of the society is to go on changing the customs on the demand of the situation.”
In Bride Price, Dai unveils the issue of child marriage and also explores noxious social practice of giving and taking bride price. The protagonist Gumba becomes victim of social custom of child marriage. Her marriage is fixed at such tender age when she was in state to hardly comprehend anything. Her determination to liberate herself from the shackles of rigid tradition weaves the main plot of the story. The novel delivers a poignant story of a woman who stands against the patriarchal jingoism to make her own identity.
The novel also touches the chord of feminism. Dai intends to wring the conscience of the society by presenting the scenes of misery and wretchedness of Gumba’s suffering in her protest against inhuman representatives of the social system. It compels the readers to question the established norms of the society which jeopardizes the lives and destiny of women: “Really, the males consider the girl as their inanimate property… When a girl is born they are glad that a new property has come to their house…”
It is sacrilege to talk of creative literature of Arunachal Pradesh without mentioning the name of late Lummer Dai. His first novel Paharar Xile Xile (1961) is considered to be the first novel in Arunachal Pradesh by an Arunachalee. In his life time, he wrote five novels which are all in Assamese language. His novels besides its many merits also offer intimate details about the traditional social life of Arunachal Pradesh in all dimensions.
Bride Price was originally published in Assamese in 1978 under the title Kanyar Mulya. The novel was a huge success. Dai received the Sitanath Brahma Choudhuri award from Assam Sahitiya Sabha for Kanyar Mulya(Bride Price) in 1978.The novel was also adapted to radio-drama in Assamese and nine other Indian languages.
Bride Pride is a book of modest volume translated in English in its true spirit by Jogendra Nath. It deserves to be in your reading list not only because of its credibility as a novel but also because of its raw account of the early phase of social transformation in Arunachal Pradesh. (The contributor is from the Department of Education, Rajiv Gandhi University)