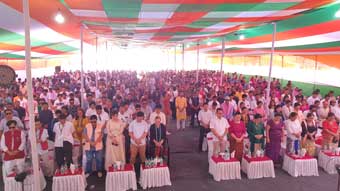 SAGALEE, Jun 13: Former Chief Minister and Sagalee constituency MLA Nabam Tuki along with the hundreds of supporters and Congress workers on Thursday paid heartfelt condolence to the bereaved family members of the brave air warriors of the ill fated IAF AN 32 aircraft which crashed on 3rd June last. Tuki while paying tribute to the air warriors thanked them for serving motherland till their last breath.
“It is a sad days for the nation. At this time of difficulty our prayers and thoughts are with the family members of air warriors,” Tuki said.
Condolences were also paid to late Kholi Tado, Hony Secretary of Arunachal Cricket Association (ACA) and late Teli Hade, social worker who both recently passed away. The gathering stood for two minute in silence as mark of respect for the departed souls.