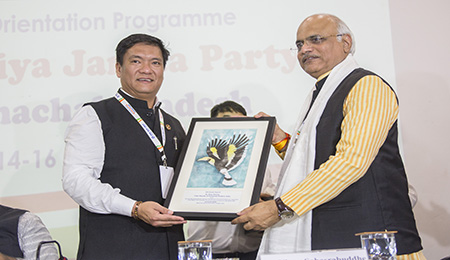 MUMBAI, Jun 14: The three-day capacity building programme for newly elected BJP MLAs of Arunachal Pradesh started at Rambhau Mhalgi Prabhodini in Mumbai on Friday.
The training has been organized in order to make the party MLAs more ‘competent and responsible’ in their works by building their capacity, said the Chief Minister Pema Khandu
in his inaugural address.
He called upon the BJP party legislators to equip themselves with the know-ledge, skills and capacities required to perform and fulfill the roles and respon-sibilities as an MLA.
It training will also cover lessons on BJP ideologies, organizational ethics and values, leadership skills, personality development and public speaking.
Khandu said since the people of the state have high expectations from the new government, the MLAs with their newly gained knowledge and specialized skills will be able live up the people’s expectations.
The capacity building exercise will be continued and followed by a refresher course next year, he said, adding that the performance of the MLAs will also be monitored. (CMO)