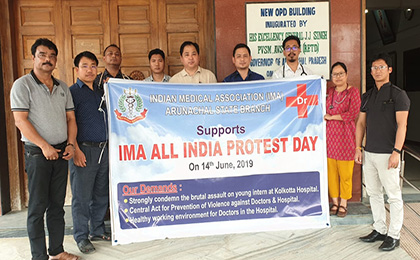 ITANAGAR, Jun 14: The Arunachal Pradesh Doctors Association (APDA) and Indian Medical Association (IMA) Arunachal State Branch have protested the assault on doctors in Kolkota and have joined the protests.
Arunachal Pradesh Health Service doctors protested against the incident on Friday by wearing black badge while on duty.
IMA Arunachal also joined the nationwide protest organized by the Indian Medical Associati-on (IMA) against the rising number of violent attacks on doctors across the country.
The nationwide protest of doctors came after a student doctor in Kolkata was attacked by a mob, leaving him with a grievous injury to the head. The Bengal doctors are on a strike since Tuesday, after a junior doctor was assaulted at a government-run hospital in Kolkata by the relatives of a patient who died.
Extending solidarity with the Indian Medical Association (IMA) movement, the Doctors of Arunachal Pradesh under the banner of IMA Arunachal State Branch demonstrated their agitation by wearing black badges in their respective work place across the state.
Vehemently condemning the gruesome attack on doctor, the IMA Arunachal Branch also endorsed the demands of IMA which include formulation of central act for prevention of violence against doctors and hospital, healthy working environment for doctors in the hospital.