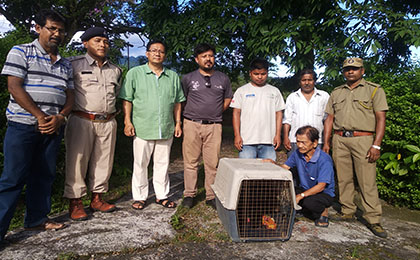 ROING, Jun 14: A local villager from Remi village under Dambuk circle in Lower Dibang Valley district rescued a three-month-old Asiatic Black Bear and handed it over to the forest officials here.
Oying Pertin rescued the orphaned male bear cub weighing 3.6 kg and measuring 29.25 cm in height and 51.82 cm in length from the jungles of Remi village, informed DFO Kenjum Rina of Mehao Wildlife Sanctuary Division.
On hearing about the rescue of the animal, DFO Rina sent a team of forest officials led by DFR Kabuk Lego, who received the bear cub from the rescuer.
Asiatic black bear (Ursusthibetanus) is listed under IUCN’s red list of threatened species and it is protected under schedule- I of Wildlife Protection Act-1972.
The bear cub was temporarily kept at the mini zoo here for few days before it was shifted to Kaziranga National Park, Assam for proper rehabilitation. It will, however, be shifted to the Center for Bear Rehabilitation and Conservation, Seijosa, Pakke Project Tiger & Sanctuary after the rehabilitation process is over.