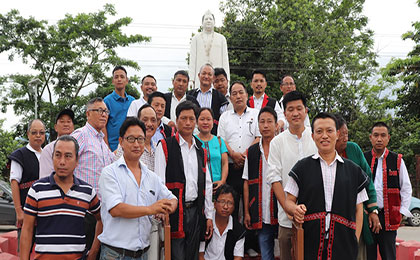 PASIGHAT, Jun 21: Daying Ering, popularly known as the architect of modern Arunachal Pradesh, was remembered on his 49th death anniversary on Friday.
People from all walks of life, led by Tirki Monmong Matpang Society president Tasing Sitang Eko and its general secretary Tado Muang, paid floral tributes to the statue of Ering near the Siang guest house here, and at his grave near the DC office complex.
Remembering the contributions of Ering, the people urged the state government to observe his death anniversary throughout the state to spread his message of harmony, brotherhood and peace.
Among other prominent senior members, retired IAS officer Oshong Ering and retired IFS officer Tasing Sitang Eko also spoke on the occasion.
Born in Runne village near Pasighat on 11 December, 1929, Ering started his career in the Indian Frontier Administrative Service. Later, he was nominated as a member of the Lok Sabha from the North Eastern Frontier Agency in 1963.
Ering, father of the current Pasighat West MLA Ninong Ering, was also appointed as a parliamentary secretary and a deputy minister in the union food & agriculture ministry.
In 1964, he chaired the Ering Commission, which in 1965 recommended a four-tier system of local self-government, which greatly influenced the adoption of the panchayati raj system.
Several institutions and prominent places are named after Daying Ering, such as the Daying Ering Memorial Wildlife Sanctuary in East Siang district, the Daying Ering College of Teachers’ Education, the Daying Ering Memorial Middle School, the Daying Ering Wildlife Foundation Eco-Development Society, and Daying Ering Colony. (DIPRO)