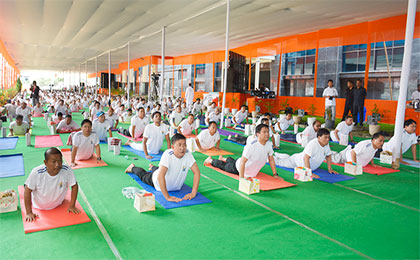 ITANAGAR, Jun 21: The fifth International Yoga Day (IYD) was observed across Arunachal Pradesh, with the theme ‘Climate Action’, on Friday with thousands of people, including ministers and government officials, stretching their bodies to various yoga postures at public events organized on the occasion.
Governor BD Mishra, who attended the programme at the NIT campus in Yupia, advised everyone to practice yoga for a healthy body and mind.
Explaining the benefits of practicing yoga, Mishra said “all the nations in the world are now getting attracted to yoga as it not only provides physical and mental solace but also unites people from different parts of the world.
“Yoga is a precious gift of Indian knowledge, consciousness and traditions,” the governor said. 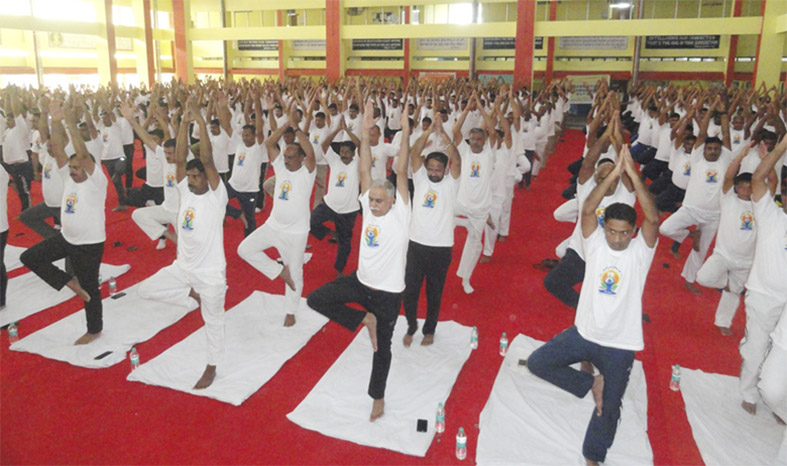 He said the theme for this year’s IYD celebration was chosen in order to raise public awareness regarding various environmental issues and address them.
A large number of people, including the governor’s wife Neelam Misra, NIT Director Prof Pinakeshwar Mahanta, faculty members and students from
various educational institutes, and police and administrative officers attended the event.
In another programme here, Chief Minister Pema Khandu along with his cabinet colleagues and legislators attended a yoga session organized as part of the IYD celebration at the civil secretariat.
“Yoga is an ancient physical, mental and spiritual practice that originated in India. Yoga is a Sanskrit word, meaning ‘to join’ or ‘to unite’, which symbolizes the union of body and consciousness,” said Khandu.
He said the government employees should practice yoga regularly as it would help them reduce stress.
“We as government servants attend office daily and work under tremendous pressure. It is but natural for us to fall prey to diseases like stress, blood pressure, etc. Herein comes the importance of yoga in our life. For us, it is a must,” Khandu said.
“Yoga ought to be taken up as a jan andolan (mass movement) and spread even to the villages,” he added.
A large number of officers and officials, including Chief Secretary Satya Gopal, performed various yoga asanas under the guidance of yoga trainer Lobsang Drema.
“Yoga is a science which can help treat many ailments without medicine,” said Health Minister Alo Libang, who attending the event organized at IG Park here by the health & family welfare department in collaboration with the capital complex administration.
“Yoga should become a way of life and the younger generation, in particular, should learn it for better concentration and memory,” he said.
Health & Family Welfare Secretary Juhi Mukherjee also spoke.
People from all walks of life, including, government employees and students, attended the yoga session and performed asanas.
Boleng MLA Ojing Tasing, Capital Complex DC Vikram Singh Malik and Health Services Director M Lego also attended the programme.
Youth Affairs & Sports Minister Mama Natung attended the programme organized by the state unit of the Nehru Yuva Kendra Sangathan at KV No 2 in Chimpu near here.
IYD was also observed in various districts and sub-divisional and circle headquarters, including Pasighat (East Siang), Tawang, Bomdila (West Kameng), Basar (Lepa Rada), Yingkiong (Upper Siang), Tezu (Lohit), Hayuliang (Anjaw), Namsai, Yupia (Papum Pare), and Ziro (Lower Subansiri) by the respective district and local administrations, in collaboration with the district health societies and various NGOs.
Yoga sessions were also organized at the RGU and various schools and other educational and health institutes, community halls and grounds across the state, highlighting the benefits of practicing yoga.
The events were attended by people from all walks of life.

Chinese Army troops and civilians for the first time also participated in joint yoga sessions with Indian Army personnel along the Sino-India borders in the eastern part of the country, according to PTI.
Altogether 70 Chinese Army personnel and 30 civilians participated in joint yoga sessions at Nathu La in Sikkim and at Bumla in Tawang district of Arunachal, according to Kohima-based defence spokesperson Col C Konwer.
The eastern command of the Indian Army also organized various events in which large numbers of troops, their families and people from the eastern and the northeastern regions participated.
Yoga workshops were organised by the units of the eastern command in Dimapur, Likabali, Dinjan, Walong, Lekhapani, Kohima, Leimakhong, Loktak, Somari Tennoupol and all other military stations, involving the local populations to create awareness about yoga and to encourage people to incorporate this form of exercise as a means to achieve a healthy life.