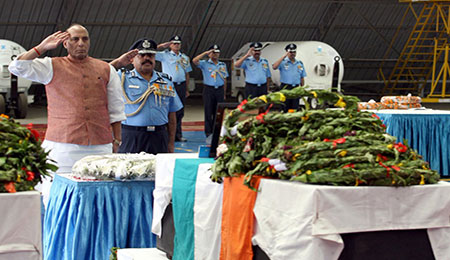 ITANAGAR, Jun 21: The 13 Indian Air Force (IAF) personnel who lost their lives in Arunachal in a crash on 3 June are being given a final farewell at various parts of the country – from Kerala to UP, Haryana, Punjab and Assam.
Wing Commander MG Charles, the captain of the An-32 aircraft, was cremated in Jorhat, Assam, with full military honours.
The mortal remains of three other IAF personnel were consigned to flames at their native places in Punjab and Haryana on Friday.
Flight Lieutenants Mohit Garg (27) and Ashish Tanwar (29) and Airman Pankaj Sangwan were among the 13 people on board the An-32 aircraft that had crashed on 3 June, about 30 minutes after taking off from Jorhat in Assam. 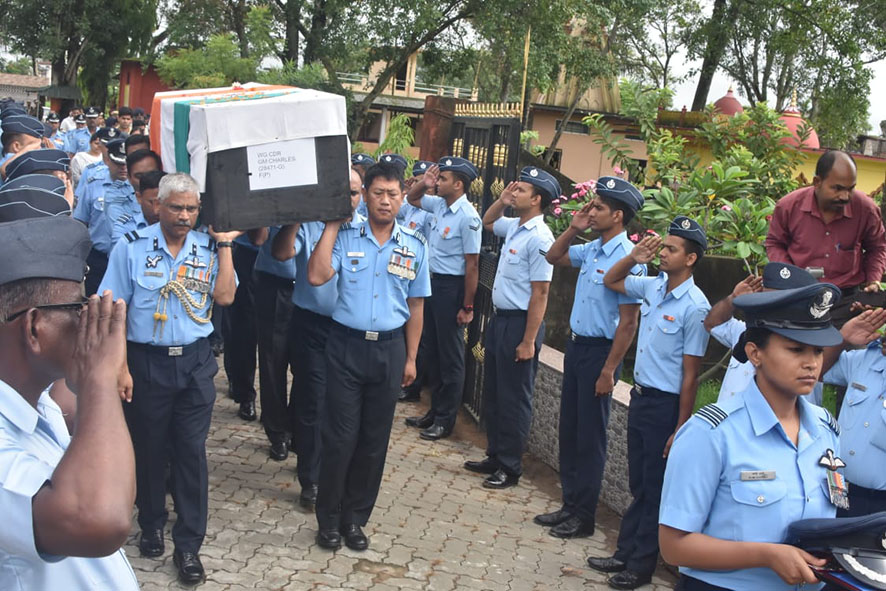 While Garg belonged to Samana in Punjab’s Patiala, Tanwar hailed from Palwal district in Haryana. Airman Sangwan belonged to Sonipat in Haryana.
Their mortal remains were consigned to flames with full state honours at their native places.
Southern Air Command Air Officer Commanding in Chief (AOC-in-C), Air Marshal B Suresh, was at the Trivandrum airbase to receive the mortal remains of Sergeant Anoop Kumar. His last rites will be held on Saturday.
Earlier, at the IAF station in Palam, defence minister Rajnath Singh paid tributes to the air warriors and also met the families of the deceased personnel and conveyed heartfelt condolences.
On Thursday night, Eastern Air Command AOC-in-C, Air Marshal RD Mathur, paid tributes to all the 13 personnel at a wreath-laying ceremony in Jorhat.
All 13 people on board the An-32 aircraft were declared dead after a team of rescuers had found the wreckage of the plane in a heavily forested mountainous terrain.
After a prolonged search by three wings of the defence services, the district administrations of Siang, West Siang and Shi Yomi, and local civilians, the wreckage of the plane was located on 11 June.
However, retrieval of the bodies took more time because of the bad weather. The IAF said it stands with the families and the next-of-kin of all the air warriors who lost their lives in the line of duty.
The 13 IAF personnel were: Wing Commander GM Charles, Squadron Leader H Vinod, Flight Lieutenants R Thapa, A Tanwar, S Mohanty and MK Garg, Warrant Officer KK Mishra, Sergeant Anoop Kumar, Corporal Sherin, Leading Air Craftsmen SK Singh and Pankaj, and non-combatants (E) Putali and Rajesh Kumar.