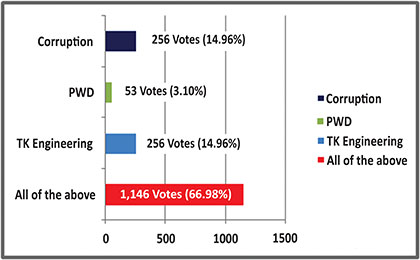 1. It’s a collaborative blunder. I wonder whether the ministers ever use the road. I bet their luxurious cars don’t make them feel the camel humps of a road and they fly everywhere. Even the police now have Mahindra Thar. Why? Because of the horrible roads. My year-old car feels like it’s a decade old and it will probably crumble to pieces if the road is like this for another year.
2. Corruption is most responsible for the pathetic condition of the capital’s highway, along with manmade disasters. Landslides kill an average of 30-50 people each year in Arunachal.
3. Corruption is the main cause of the pathetic condition of the capital’s roads.
4. All these are involved in the worsening road condition of the capital. Sometime back, my professor from the Pondicherry Central University said to me, “Apa, your state’s road condition is horrible; even the road of the capital is full of potholes. I didn’t enjoy travelling in and around the capital complex.” I was left red-faced in the class.
5. All of the above are responsible for it. Along with them, common citizens are also equally responsible for it as they are indulging in illegal cutting which triggers blockages and mudslides on the road.
6. TK Engineering. They were sleeping the whole winter and now they have woken up, knowing that there will be rain.
7. One can openly witness the working nature of lone mammoth consortium. During work season, they hibernate, and as soon as monsoon starts, earth-cutting starts, which is major cause of landslides and erosion, creating nuisance.
8. Since TK Consortium has undertaken the capital highway contract, TK Engineering is solely responsible for the pathetic condition of the capital highway. Therefore, the present government should take necessary action against TK Engineering as soon as possible.
9. All of them, and the government is equally or more responsible for the situation. The government’s duty is not just to make policies and schemes but also to make sure the same are being executed on time and as per the laid down guidelines. The government is just like parents or guardians of the citizens, and parents must know how and where their children are spending their pocket money. Then only will the parents be considered responsible parents and not careless ones.
10. It’s the nexus between the engineering agency, and the state and central governments. Last time, the DCM had given TK Engineering a deadline of March 2019, but I guess it was just eyewash to appease the public. Let’s wait till October and see what step the government will take if the road isn’t completed by then. Furthermore, let’s remember what PM Modi said: “Na khaunga, na khaane dunga.”
11. Apart from the abovementioned reasons, the weakness and lackadaisical attitude of the state government is responsible.
12. Corruption in every step, starting from the ground level officials to the ministry, is the root cause.
13. I would say all of the above. First of all, everyone wants their share in terms of money, and nobody wants development, nobody wants public convenience. Everyone wants to build high-rise buildings and purchase luxury vehicles. Second of all, the officials of the PWD itself are the contractors of every project, so, what else can we expect? TK Engineering compromised on quality as it is hardly durable for one-and-a-half year.
14. Normally, for such a short-distance road, the time schedule for completion of the project is one year, whereas as per agreement, it is to be completed within three years. So TK Engineering is taking its own time.
15. I wonder if the officials of TK Engineering and the PWD feel ashamed while driving on the roads of our capital complex.
16. Corruption is the root cause of all the sufferings the innocent public bear while commuting on the capital’s roads. The PWD is the mother of all corruption in our state. The central government has to be blamed equally for its appeasement politics as from the early days, huge amounts have been sanctioned to our state on a regular basis but our own greedy corrupt engineers along with a few learned contractors and public leaders ate up all; thus, the result is in front of all of us. No accountability and proper implementation of works.
17. All of the above in general, but TK Engineering in particular, since it’s their job to complete the task that’s been undertaken by them. Firstly, why did they take more than what they could chew on their plates? Secondly, during last year’s monsoon, they complained regarding the incessant rain being a deterrent to the construction process, but come winter, when it doesn’t rain as frequently, they completely stopped working. With all the JCBs lying around uselessly, they could have at least made a ‘JCB ki khudai’ video, which would have earned them some extra bucks from YouTube. Now that monsoon has arrived again, I am sure they will put the blame on the poor weather for all their inadequacies.