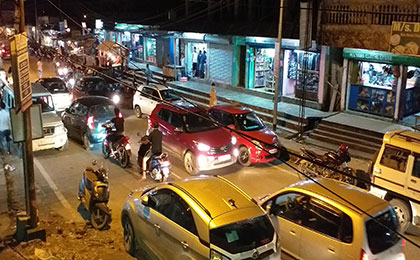 [ Taba Tani ]
DOIMUKH, Jun 24: After the issue of bad roads in Doimukh was resolved, the town now has to deal with traffic congestion, especially in the market area.
One of the busiest suburban areas, after the capital complex, Doimukh requires good traffic management as it houses the state’s lone central university (Rajiv Gandhi University), one of oldest government higher secondary schools, and many other important institutions. It has also been a major business hotspot after the establishment of the Saturday market, and the roads are filled with free-roaming cattle and haphazardly parked vehicles.
According to the 2011 census, Doimukh has a population of 2,222, and a total of 9,749 within Doimukh circle, but the figures have surely increased by now. Even with all the factors in plain sight, the traffic is unattended to by the administration for reasons best known to it.
On being asked, Doimukh police station OC, Inspector Banghang Tangzang, said, “There is a dire need of a separate traffic cell with 10 personnel from the police department and 10 personnel from the public.”
He informed that with 22 policemen, the police station can be considered to have a shortage of manpower.
“While some are in station, some are on leave or posted on other duties,” he said, and informed that the police station currently has only three personnel per eight hour as the others are on investigation duty.
This, he said, was one of the prime reasons why policemen could not be deployed to tackle the traffic problems.
Meanwhile, Papum Pare DSP Gari Tai requested the residents of Doimukh to keep their vehicles in far and open areas, away from the main market, and walk to the shops to help ease the traffic congestion. She also urged the market welfare committee of Doimukh to carry out systematic traffic management to mitigate the problem.
A resident of Doimukh, Chukhu Pekhi, commented: “Parking ethics need to be maintained, and traffic jams are always caused by wrong parking or driving without indicators.”
Doimukh is connected to Assam by the Doimukh-Harmutty road, and to Lower Subansiri district by the Doimukh-Potin road, besides to several other districts of the state.
A large number of commuters have to pass by Doimukh before they get into the capital complex, and the administration needs to address the issue of daily traffic congestion before it gets out of hand. (The contributor is an intern at The Arunachal Times)