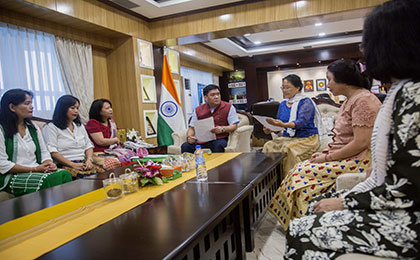 ITANAGAR, Jun 26: Chief Minister Pema Khandu has assured the Arunachal Pradesh Women’s Welfare Society (APWWS) to keep provisions in the forthcoming budget for in-depth advocacy, awareness and research to tackle drug as well as alcohol addiction in the society.
The CM said this during a meeting with a five-member APWWS team, which was led by its president Dipti Bengia Tadar at the former’s office here on Wednesday.
Khandu assured his government’s full cooperation and support to resolve the issues raised by the association.
He appreciated the APWWS for its constructive suggestions submitted during the pre-budget consultative meeting held on Tuesday last
and underscored the Association’s concern on the growing menace of drug addiction, especially amongst the youth.
“I fully endorse your concern on drug addiction and the need for a concerted effort in curbing the menace as well as de-addiction and rehabilitation of our misguided youths. While the government is duty bound to create a drug-free society the role of womenfolk is paramount in this crusade,”Khandu pointed and hoped the Association would lead from the front.
He also acknowledged the need to make marriage registration mandatory as urged by the association for security of not only the wives but also of husbands when it comes to legal issues.
The women’s body further appealed to the CM to provide all basic and required facilities in the lone mental hospital of the state located near Doimukh.
It suggested that, if feasible, any reputed NGO with a good track record can be authorised to run the hospital to cater to the needs of the patients, who require round-the-clock and special treatment.
The APWWS also raised concerns over discreet gambling dens across the state, which it claimed, was causing disharmony in the society and destroying families. (CMO)