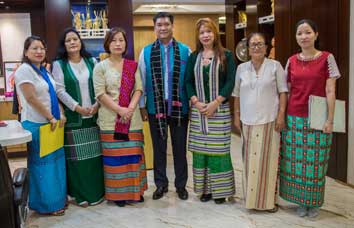 ITANAGAR, Jun 27: The Arunachal Pradesh State Commission for Women (APSCW) has called for making registration of marriages compulsory under law.
An APSCW team, led its Chairperson Radhilu Chai Techi, which called on Chief Minister Pema Khandu at his office here on Thursday, expressed hope that women-centric welfare measures would see a quantum jump under his leadership.
Discussing various issues related to women in the state, the commission reiterated the necessity to make registration of marriages legally compulsory.
Techi informed that “hundreds of cases come to the commission with issues related solely to marriages,” and said such disputes remain unaddressed or partially addressed due to the absence of marriage registration.
She urged the state government to come up with a feasible act under which all marriages are registered.
The commission also expressed grave concern over the menace of drug addiction among the youths, and requested Khandu to make provisions in the budget for establishing drug rehabilitation centres and juvenile observation homes, “with proper facilities and manpower,” in the state.
The APSCW team also urged the CM to consider the longstanding demand of the women for reservation in jobs and in the state assembly.
Stating that most issues of women would be resolved if the women are made financially independent, the APSCW members suggested “making special loan provisions for women willing to take up small businesses.”
“Because they are economically dependent on their male counterparts, women are subjected to various injustices,” they said.
They also urged the government to establish a state child rights commission as soon as possible.
The APSCW being a quasi-judicial body, the members advocated empowering the commission for it to be able to work efficiently in delivering justice to needy women. They also drew the CM’s attention to the lack of regular staff, manpower and office space at the APSCW, saying such disadvantages affected the efficiency of the commission.
The chief minister acknowledged the constraints under which the women’s body is working, and assured to resolve all its issues in phases. He said he would “take up the commission’s suggestions and requirements with the authorities concerned, and include these in the 2019-20 budget.”
Commending the proactive role being played by the APSCW, Khandu urged the commission to “cooperate with the government with constructive suggestions and interventions.”
Besides Techi, APSCW Vice Chairperson Heyomai Towsik, Hoksum Ori, Likha Joya and Techi Hunmai were present at the meeting. (CMO)