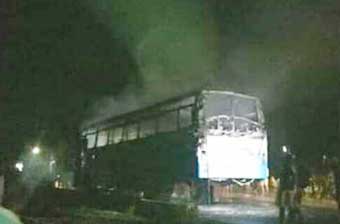 Staff Reporter
ITANAGAR, Jun 30: In an apparently freak accident, the APSTS’ Itanagar-Shillong bus (ARX-O529) caught on fire when it collided with a biker at Biswanath Chariali in Assam at around 9 pm on Saturday.
Official sources in the APSTS informed that the bus was on its way to Shillong when it collided with a speeding biker, who died on the spot. The sources said the bus caught on fire after the bike’s petrol tank burst. The passengers who were aboard the bus are reportedly safe.
APSTS Itanagar Station Superintendent Tuter Dulom informed that stranded passengers who wished to continue on to Shillong were driven there after he engaged a transit bus.
“However, some of the passengers returned to Itanagar after the incident,” Dulom said.
After the incident occurred, Capital Complex SP Tumme Amo intervened and handled the situation in coordination with his Jamugurihat counterpart.
A team of the APSTS Employees Association and executive members of the Itanagar APSTS station rushed to the Biswanath Chariali police station to take stock of the situation and to have the APSTS staff released from police custody.
“The bus driver has been released by the police after interrogation as there was no FIR from the victim’s family,” Dulom informed.