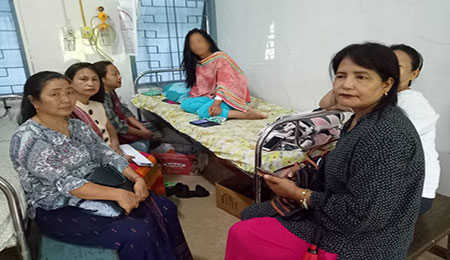 ITANAGAR, Jul 2: The Arunachal Pradesh State Commission for Women (APSCW) on Tuesday expressed deep sorrow over the recovery of the dead body of a schoolgirl in Tezu in Lohit district.
The APSCW said it has spoken to the Tezu superintendent of police, who it said
informed that “the postmortem of the girl has been done and investigation is under process.”
Additionally, the commission has received a case of domestic violence against a woman in Dumporijo in Upper Subansiri district, through an NGO.
The victim is currently admitted at the RK Mission Hospital (RKMH) here, and an FIR has been lodged against her husband, Keluk Hete, at the Dumporijo police station.
The APSCW spoke to the Dumporijo police station OC, who informed that the accused was arrested on 30 June and is currently in judicial custody for further investigation.
Taking suo motu cognizance of the cases under Section 16 (b) of the APSCW Act, 2002, the commission has sought status reports from the Lohit SP and the OC of the Dumporijo police station.
The commission has requested the authorities to conduct proper investigation into both the cases, and requested all sections of the society to cooperate with the police.

APWWS members meet survivor
Meanwhile, members of the Arunachal Pradesh Women’s Welfare Society (APWWS) on Tuesday met the domestic violence survivor from Upper Subansiri district at the RKMH.
The woman, who had reportedly been assaulted by her husband after she objected to his taking a second wife, is currently undergoing treatment at the hospital.
Seeking a strong law against those who indulge in polygamy, the APWWS said, “Polygamy, which is prevalent in Arunachalee society, is the root cause of many problems, with children and women becoming the worse sufferers.”
It said the number of assault cases is rising in the state due to the social sanction granted to polygamy.
The APWWS team had earlier met the APSCW regarding the latest case of domestic violence.