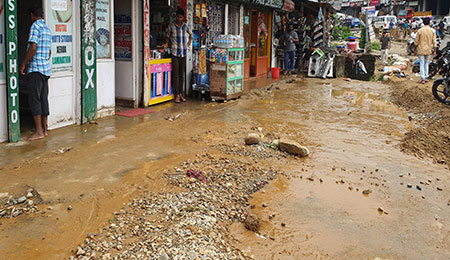 ITANAGAR, Jul 3: Residents and shopkeepers residing in the Capital Complex have reported facing difficulties due to absence of proper drainage system, with the recent rains allegedly causing shopkeepers to lose properties worth lakhs.
Claiming that “improper road construction and drainage system was the cause of loss for all those residing in the state capital,” a few residents and shopkeepers informed that “rain water enters the apartments and business establishments.”
“Local residents, businessmen and daily wage earners are the worst sufferers,” a citizen said, while also claiming that “no one from the administration has visited the rain water affected areas to hear their problems.”
On Wednesday, dozens of shops in Ganga Market, near Akashdeep, E Sector and other parts of the city were reportedly affected and their properties damaged due to mud and rain water seeping into their shops from the national highway.