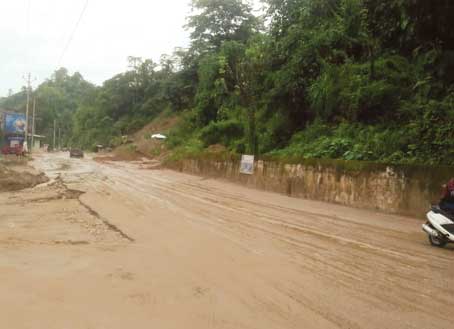 Staff Reporter
ITANAGAR, Jul 4: The condition of Papu-Yupia-Potin Trans-Arunachal Highway (TAH) is in a deplorable condition with several portions of the stretch of road from Papu to Kola camp through Yupia getting washed away by heavy rainfall in the past few weeks.
Reportedly, earth cutting along the highway has also damaged some stretches of the road.
“The illegal earth cuttings near the roadside have destroyed the highway in many areas, and the Papum Pare district administrations is silent over it. Strong action should be initiated against those people who have done illegal earth cutting near the highway. Because of the greedy action of few, the whole state is suffering,” said a resident of Yupia.
He also appealed to the state government to keep fund provision in the budget for the maintenance of Papu-Yupia-Potin road.
“Before making tall claims about constructing new highways, the state government should first maintain the existing highways. Look at the terrible condition of the Papu-Yupia-Potin and Itanagar to Hollogi road. These two highways are recently constructed ones, but they have not been maintained for the last two years. This has caused further deterioration of the highways,” another resident of Itanagar said.