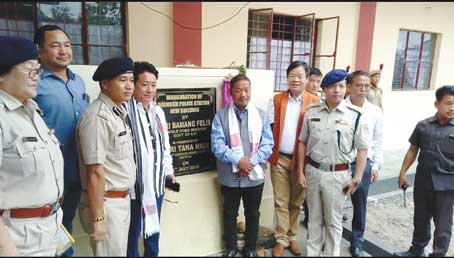 Staff Reporter
DOIMUKH, Jul 4: Home Minister Bamang Felix on Thursday warned of initiating strong action against indisciplined police officials. He said this while inaugurating the new police station building here.
On the occasion, Felix urged the police officials to set example for others to follow. “Before trying to discipline others, police officials will have to first of all set examples and be disciplined. This has to start from the Home minister to the DGP, DIGP, SP and others,” said Felix.
The home minister also warned of action against corrupt police officials by urging them not to convert the police stations into ‘collection centres.’
“There is a general perception among the public that police stations have become collection centres. It is the duty of the police to negate such image and send out a positive message. A police station should be place of reformation and it should give hope to the public,” the Home minister said.
However, he also called on the people of Arunachal Pradesh to develop sense of belongingness and pride on being citizens of this state for true progress.
“The public will have to create congenial atmosphere for the state to develop. The duty of the police personnel is to maintain law and order but the citizen’s role is important to contain law and order. We, the tribals proudly claim to be the owner of land, air, mountain and river, therefore, it is our responsibility to protect them,” said Felix.
Regarding the recent appeal of the Arunachal Pradesh Police Compassionate Aspirant Victims (APPCAV) to the state government to appoint the candidates who are awaiting appointment in the Police department on compassionate ground, the home minister assured that “there will soon be positive news in this regard.”
Felix also urged the people of Doimukh town to bring back the glory attached to one of the oldest towns of the state.
Meanwhile, local MLA Tana Hali submitted a memorandum to the Home minister highlighting various problems faced by police personnel of Papum Pare district.
“There is need for establishing new police stations at Yupia, Gumto and Sangdupota to meet the new challenges. There is need for police accommodations in Doimukh and other circles,” said Hali.
Earlier, Capital Complex SP Tumme Amo, who is also incharge of Papum Pare district, drew the attention of the Home minister towards issues concerning police officials of the district and urged him to grant fire tender for Sagalee police station on priority basis.
“We need fire tender at Doimukh PS too, but there is an urgent need at Sagalee. The condition of the Kimin PS is also bad. The Tarasso outpost should be upgraded to a police station keeping in view the sensitivity of the area,” said Amo.
Further, the SP informed that a majority of police officials, including the SP have no accommodation in Yupia.
The new building inaugurated by the Home minister has been constructed at a cost of Rs 1.80 cr by the Rural Works Department (RWD).
Chayang Tajo MLA Haying Mangfi, DIGP West Apur Bitin and RWD Executive Engineer Techi Jobae were also present on the occasion.