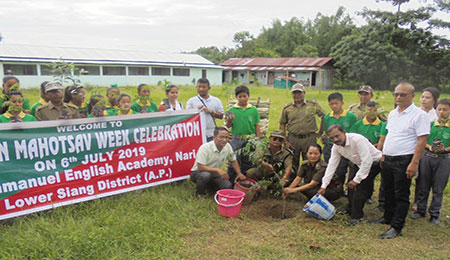 ITANAGAR, Jul 6: Van Mahotsav, the week-long festival of tree plantation, is being observed widely in Arunachal Pradesh, involving mostly students.
The celebration reached a peak on the penultimate day on Saturday with the Forest department, joined by the public, planting thousands of saplings across the state.
The Nari Forest Range under Pasighat Forest Division (T) on Saturday celebrated the Van Mahotsav involving the students and organizing tree plantation programme at the Immanuel English Academy, Nari.
RFO Omeng Moyong Bam explained the importance of tree plantation to maintain ecological balance and increase the green cover. She encouraged the students to plant more and more trees in their locality area and take proper care of the planted saplings to ensure growth.
Around 100 saplings were planted in the school campus.
The department has decided to continue the plantation drive and environmental awareness campaign till 12 July.
The Banderdewa Forest Division celebrated the week involving the students at Government Middle School Dobam, Karsingsa in Papum Pare district.
Fruit bearing trees (Litchi chinensis) were planted at the school campus by the students, the teachers and the forest officials.
PCCF WAC RK Singh and Banderdewa Forest Division DFO Tasso Sira attended the programme and urged the public to participate in the Van Mahotsav.
Essay and drawing competitions were also organized among the students on themes related to ecology and environment.
The Forest department through its Banderdewa division also provided solar power saving devices to the local GBs and Government Middle School, Dobam.
Vanmahotsav week is also being observed in all the eight forest ranges under Banderdewa Forest Division.
Over 700 saplings were planted in the Yingkiong township area as part of the Van Mahotsav week celebration on Saturday, organized by Yingkiong Forest Division in collaboration with the district administration.
Tree plantation drives were also organized at schools and government quarters’ premises.
Upper Siang DC Karma Leki, government employees, public leaders and members of community based organization participated in the programme.
Plantation programmes were also carried out in Jengging, Tuting, Mariyang, Geku and Katan circles of Upper Siang district.
The Van Mahotsav was also celebrated at Yazali on Saturday by organizing a plantation drive at Yazali CHC.
The programme was organized by the Range Forest Office, Yachuli under Hapoli division.
Representatives of the Forest department, the 119 RCC GREF, NEEPCO, senior citizens, teachers and students from various schools of Yazali attended the programme.
The plantation programme was followed by an awareness meeting at the community hall in Yazali, where the Forest officials explained the causes and impacts of climate change and the roles played by trees in reducing global warming.
Plantation drive was carried out in Boleng Township in Siang district on Saturday.
DC Rajeev Takuk, ABK’s Siang unit president Taho Mibang and other members of the organization, government employees from various departments, general public actively participated in the plantation drive.
Similar plantation programme was also carried out in Rumgong.
The programmes were organized by the Siang district administration and department of Environment and Forest in collaboration with the Siang unit of Adi Ba:ne Kebang.