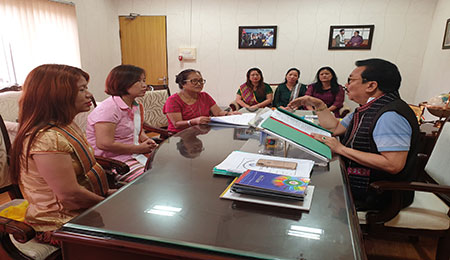 ITANAGAR, Jul 7: The members of Arunachal Pradesh State Commission for Women (APSCW), headed by its Chairperson Radhilu Chai Techi called on Deputy Chief Minister Chowna Mein at his official residence here on Sunday to discuss various issues concerning women.
APSCW members exuded hope that women-sensitive issues and welfare measures would be taken up by the government and the government will readdress the various issues and challenges confronting the commission.
While highlighting the various issues related to women and children in the state, the commission reiterated the necessity to enact laws for compulsory registrations of marriages.
‘Most complaints and cases that come to the Commission are related to marriages and domestic violence’, the APSCW chairperson said. She urged the government to formulate feasible Act to tackle the situation.
Expressing concern over continuous rise of crime against women and domestic violence in the state, the APSCW suggested for installing CCTV at all the prime locations in the twin capital cities to check growing rise of crime against women in the capital.
They also expressed grave concern over the menace of drug-addiction amongst the youths of the state. They said that ‘the Commission had raised the issue to Chief Minister Pema Khandu recently where they have requested him to keep provisions in the budget for establishment of drug rehabilitation centres and juvenile observation homes with proper facilities in the state.
The Commission discussed on 33% reservation in Assembly and in jobs for womenfolk of the state, which if materializes, they said, would be one of the greatest achievements of the Pema Khandu led government.
Meanwhile, the members demanded for setting up of permanent office building, creation of regular posts for the office of the Commission to work efficiently and deliver justice to needy women, besides also drawing the attention of Deputy Chief Minister towards creation of independent plan head of commission and special loan provisions with subsidy to women entrepreneurs of the state.
The Deputy Chief Minister, while acknowledging the proactive role played by the commission, assured to look into their demands placed before him and also assured to resolve all in phased manner after discussion and consultation with the Chief Minister and cabinet colleagues.
APSCW team including its vice chairperson Heyomai Towsik and Member Secretary, Yame Higio were present during the meeting.