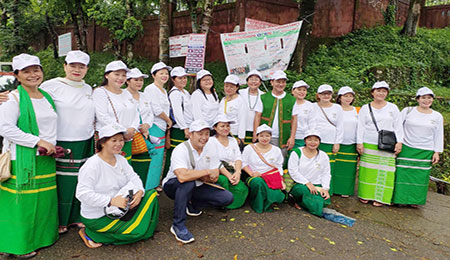 ITANAGAR, Jul 7: The Adi Bane Kebang (ABK) carried out massive afforestation drives in several districts as part of the Van Mahotsav week celebration.
The plantation drives were carried by the district ABK units in Upper Siang, East Siang, Siang, Shi-Yomi, Namsai, Tezu, Lower Dibang Valley and Papum Pare district.
The ABK and its women’s wing jointly celebrated the Van Mahotsava on 7 July by organizing plantation drives and awareness programmes in various places in Capital Complex.
More than 600 seedlings were planted at GHSS, Donyi-Polo Mission School for Hearing and Visually Impaired (DPMSHVI), Donyi-Polo Ganging, Itanagar, DC’s office complex in Yupia and Naharlagun Railway Station.
Dustbins were also provided to GHSS, DPMSHVI and Donyi-Polo Ganging. The ABK also contributed Rs.50,000 to DPMSHVI as a token of love.
ABK president Getom Borang acknowledged the cooperation extended to ABK by all the district forest officers in successfully carrying out the plantation drives.
Stating that deforestation is a major cause of climate change leading to global warming, he discouraged the people from felling trees. He hoped the Van Mahotsav would help reduce the declining number of trees and also bring about a change of the environment.
“Our motto in this programme was plant trees, save trees,” said Olen Mengu Damin.
“We have been felling trees ruthlessly without a second thought in the name of urbanization, which has only affected us in a big way,” she said.
The ABK’s youth wing also celebrated Van Mahotsava week and planted around 200 saplings in the GHSS, Sille and Govt Primary School Sika-Tode premises.
The ABKYW has decided to plant around 50,000 saplings during their tenure by making it as its flagship programme. It appealed to the people of state to plant more trees to reduce global warming.
The ABK’s Siang district unit in collaboration with the PHED and Environment and Forests department organized plantation drives at Pangin and Kaying on Sunday.
Our Roing Correspondent adds:
The Lower Diabang Valley (LDV) unit of the ABK’s women’s wing planted 100 fruit-bearing saplings in the premises of the GSS and the Donyi-Polo Gengging at Parbuk as part of the Van Mahotsav celebration.
Members from various SHGs, NGOs and villagers from Parbuk village also joined the plantation drive.
The ABK’s WW president of LDV unit Oseng Apum Yirang said deforestation driven by population growth and rapid urbanization has resulted in global warming, environmental pollution and natural disasters, endangering our survival.
“The plantation drive is an effort to increase the forest cover as well as to create public awareness about the importance of trees”, she said.
ABK’ WW general secretary of LDV Danggap Perme Tayeng urged each and every one to plant trees in their locality areas.
ABK’s former president of LDV unit Mibom Pertin appealed to the public to take proper care of the saplings planted to ensure growth.
The plantation drive was organized in collaboration with the Dibang Forest Division with theme “Festival of trees is Festival of Life.”
Meanwhile, the Likabali Forest Division carried out mass plantation drives in different locations of Lower Siang district, including Likabali township area, Kangku, Akashi Ganga Hindu pilgrimage site, Gensi as part of the Van Mahotsav celebration.
More than 25,000 saplings of various species were planted during the week-long programme and people from all walk of life, including government employees, GBs, public leaders, bazaar committee members students and general public joined the plantation drives.
A painting competition on the key theme was also organized among the students at GSS, Kangku on 1 July and the winners were awarded with trophy and certificates.
The week-long programme was initiated by all Range Officers of Likabali Forest Division under the guidance of DFO B Taba.