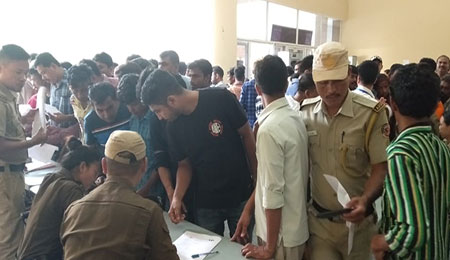 Staff Reporter
ITANAGAR, Jul 7: The tenants and employees residing in and around the Capital Complex will have to verify their identity with the Police department from 7 July onwards.
This was informed by Director General of Police (DGP) SBK Singh during the first ‘verification mela’ organised by the Arunachal Chamber of Commerce & Industries (ACC&I) in collaboration with the APP for tenants and employees in the Capital Complex at the Dorjee Khandu Convention Centre here on Sunday.
Clarifying that the verification is not confined only to non-locals, Home Minister Bamang Felix said that the drive was for “every person living in rented accommodation for business or employment purposes, whether non-tribal or tribal.”
“There have been some disturbances in the recent past and these disturbances are mostly from the floating population; the ones who do not have a proper address to their name,” he said, adding that the programme was to ensure security and safety of all residents in the Capital Complex.
Informing that the forms will be available in the police stations, Felix asked the DGP to appoint a dedicated officer to look into the verification procedure and appropriately educate the people on the process involved.
He cautioned that after the second verification mela scheduled for 21 July, police officials will begin making rounds after 1 August.
“Those, who do not comply with the order by then, will be penalised or jailed for six months, or both, under IPC 188,” he added.
He also requested house owners and shopkeepers to install CCTV cameras in their homes and business establishments to help capture unwanted activities.
“This will also assist the police in identifying people engaged in criminal activity,” he said, while also assuring the business community that those who engage in extortion from businesses will be taken to task. He, however, cautioned businesses from heeding into the demands of the extortionists or to face similar penalties.
Additionally, he informed that the department will release five prisoners for their good conduct during imprisonment on the occasion of the 150th birth anniversary of Mahtama Gandhi this year.
Earlier, ACC&I secretary general Toko Tatung informed the gathering that the identification of anti-social elements in a growing economy with heavy influx was a priority and necessity.
He informed that “the exercise will be replicated in phased manner in the rest of the state shortly.”
Local MLA Techi Kaso and Capital SP Tumme Amo also shared their views on the necessity of the verification and assured their support for the same.
The minister, MLAs and officials also filled out the forms as part of the inaugural process.
Later, forms were distributed to the participants
Besides bazaar committees, business owners and employees, MLAs Hayeng Mangfi and Jikke Tako, ACC&I president Tarh Nachung, police officials and ACC&I members were present on the occasion.