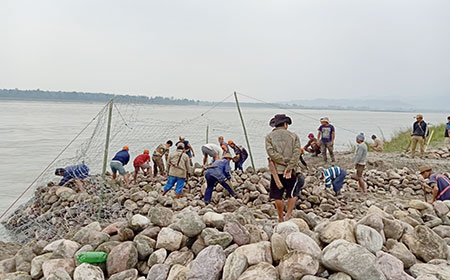 ITANAGAR, Jul 8: The state government on Monday said that due to the discontinuation of the Flood Management Programme by the Centre and lack of state funding for flood management, no tangible steps could be taken up so far to prevent floods in the Siang river.
Responding to a question by Congress MLA Ninong Ering, Water Resources Department Minister Mama Natung said the Integrated Flood and River Bank Erosion Management Project, which was supposed to be funded by the Asian Development Bank (ADB) at a cost of Rs 60.67 crore in 2010, did not materialize “due to intervention from neighbouring country.”
The minister further said that floods, erosion and landslides are caused mainly by heavy rainfall, cloudburst, and breach in artificial ponds and lakes, which he said are beyond human control, and added that since 50 percent of the drainage area of the Siang is in China, the state government can do little to contain the occurrence of floods.

The Chinese angle
Taking part in the discussion, Chief Minister Pema Khandu said he has taken up the matter of flood protection with the Centre.
The chief minister said the state is not receiving any external funding due to objection from a neighbouring country. He did not directly name China, but termed it “a unique problem.”
Owing to Chinese objection, the ADB had withdrawn the project in 2009, stating that it was a mistake. Though it was never made public, the WikiLeaks in its cables released information that India’s proposal for flood protection in Arunachal was dropped by the ADB following pressure from China. The ADB and member countries had said yes to a country partnership strategy for 2009-12, which included Siang flood protection.
After the Chinese objection, India omitted Arunachal from the project list altogether.

Villagers initiate flood protection measure
Meanwhile, the left bank of the Siang river continues to be under threat from flood.
Seram, one of the nine villages directly threatened by the Siang, is already facing trouble. The festival ground of the village is reported to be under water.
Seram is one the worst affected villages. Last year, several homes there were claimed by the Siang. As the monsoon reaches its peak, the villagers are yet again living in fear of devastation.
Sigar village is also facing imminent threat.
“The villages, along with the SEEANG Foundation, are carrying out a crash programme for protection against the rampaging Siang river which has breached its previous limits and
is flowing dangerously close to the village,” said M Panging Pao, who heads the foundation.
“Other villages of the area are planning to work for more days to protect their villages and fields,” Pao said when contacted by this daily.
Sigar, Ralling, Motum, Borguli, Seram, Kongkul, Namsing and Mer villages are directly under threat. Since the massive flooding started, an estimated 10,000 hectares of land, including agricultural fields, have been washed away by the Siang.
While deforestation is said to be one of the main causes of floods, no study has been carried out in this regard.
Following a request from the villages, the Pema Khandu government had announced Rs 35 crore as flood protection fund, but due to the election model code of conduct (MCC) being in place at the time, the release of the fund was delayed.
The people are not amused. “Why should something as urgent as flood protection be hampered because of the MCC?” said a citizen.
In the meantime, the SEEANG Foundation and the villagers of the area are constructing bamboo and wood porcupines, bunds and spurs in areas under direct threat from the flood. Even as the state figures out a way to get funds from the Centre and international funding agencies, the people in Mebo subdivision continue to live in fear of imminent flood.