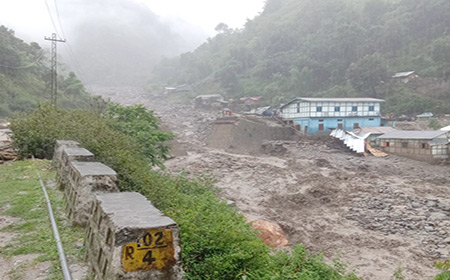 BOMDILA, Jul 8: The monsoon has unleashed fury in various parts of West Kameng district as incessant rains triggered landslides and flashfloods, and brought traffic on the Balipara-Charduar-Tawang (BCT) road to a complete halt.
Massive landslides on Sunday blocked the BCT road at several points, which forced the administration to close down the road, while incessant rains caused unstable rocks along the Orang-Kalaktang-Shergaon-Rupa-Tenga (OKSRT) road to roll down onto the road.
As per reports, hundreds of vehicles, including Army convoys and passenger taxis, remain stranded on the roads.
While an RCC culvert in Kaspi, under the Singchung administrative subdivision, was washed away, a boys’ hostel, four SPT buildings, a restaurant, and a few parked vehicles were also damaged in a flashflood.
A 23-year-old woman, identified as Kanchi Mosbu, has been reported missing.
A stretch of the road that connects the Nag Mandir area and the Jamiri administrative centre has also been washed away.
Three members of a family narrowly escaped from perishing in a landslide that completely damaged their house in Sera village, near Bomdila, on Monday morning. They have since been shifted to a safer place.
West Siang Deputy Commissioner Sonal Swaroop has ordered closure of the BCT road and prohibited the entry of vehicles from the Assam side in Bhalukpong and Tenga side in the district.
The administration has also activated 24×7 emergency control rooms in all the administrative circles, and direction has been issued to the administrative officers to prohibit people from venturing into rivers and streams.
The DC has directed the ADCs of Singchung and Rupa to evacuate people from the flashflood-affected areas and ensure provision of food, shelter and drinking water for them.
Meanwhile, the district administration has asked the BRTF to “come up with a plan to effectively meet the monsoon challenges, in line with the disaster management plans.”
The road construction organization has also been directed to put in place adequate men and machineries at all the vulnerable locations along the BCT and the OKSRT roads, “so that the flows of essential commodities, movement of the public and Army convoys are not hampered.”
The administration and the police in Singchung are engaged in evacuating the residents on the bank of the Zding-kho river in Hemoibung village. However, incessant rain is reportedly hampering the evacuation and mitigation measures being taken up by the administration, the police and the BRTF. (DIPRO)