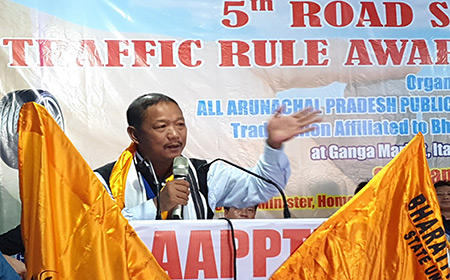 ITANAGAR, Jul 14: Home Minister Bamang Felix on Saturday urged road users to “change their mindset and follow traffic rules to reduce traffic problems in the capital complex.”
Addressing a ‘road safety and traffic rule awareness programme’ organized by the All Arunachal Pradesh Public Transport Federation (AAPPTF) at the Ganga market here, Felix asked the people to cooperate with the traffic management authority and shirk the “habit of blaming each other for every traffic-related problem.”
“The issue of traffic congestion is created by all of us in one way or the other. The onus of fixing the traffic problems lies on us, as well. When we follow traffic rules, traffic congestion automatically goes down,” the minister said.
Speaking on the Chandranagar-Papu Nallah highway, he said the chief minister “has already convened a meeting with the people, department and construction agency concerned in this regard, and road construction work will begin in full swing after the monsoon.”
The minister also announced Rs 10 lakhs for the transport federation “as an encouragement to its cooperation in traffic regulation.”
Arunachal Pradesh Building & Other Construction Workers Welfare Board Chairman Jalley Sonam urged the people to “cooperate with the government agencies for development in all spheres.”
He also called for putting an end to the “fine system,” and said the law enforcing authorities should have a free hand in performing their duties during road accidents.
Capital SP Tumme Amo informed that “from 20 July the ‘no helmet, no petrol’ policy will be implemented strictly,” and sought the people’s cooperation in this regard.
Citing the increasing population in the capital complex, Amo said, “Every hotel, shopping complex, etc, should have their own parking lots.”
AAPPTF president Dobing Sonam highlighted the importance of traffic guidelines and the need to obey traffic rules. He, however, lamented that the state government and the capital complex administration “have not paid heed to the federation’s longstanding demand for constructing parking areas for commercial vehicles in the capital region.”
The AAPPTF submitted a memorandum to the home minister, demanding, inter alia, immediate allotment and construction of parking lots for commercial vehicles, and installation of CCTV cameras at all vital locations of the capital complex.
Transport Director Tage Tado, District Transport Officer C Wangsu, Bharatiya Mazdoor Sangh state president Yasi Sonam and AAPPTF IPR secretary Kokum Paffa also spoke.