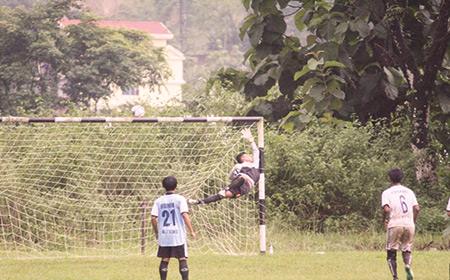 JOLLANG, Jul 17: Chimpu FC, United Doimukh FC and Champion FC won the league matches on the fourth day of the Jully Super 16 Football Championship-2019 played at the Don Bosco School Ground, here on Wednesday.
In the first match, Chimpu FC defeated Likha Yagal FC 3-2.
In the first half of the match, Happy Talang of Chimpu FC scored two goals for his team in the 25th and 36th minutes, while Tsering Sonu scored the third goal for Chimpu FC in the 39th minute.
In the second half, Likha Yagal FC’s Luknu Lombi scored two goals in the 58th and 61st minutes, but the team failed to win the match.
In the second match, Kampung Kamyer FC was defeated by United Doimukh FC 3- 0. Tana Tussar and Taba Heli scored for United Doimukh in the 45th, 47th and 65th minute.
In the third match, Champion FC defeated Puwak 11 by 2-0 goals.
Both teams failed to score in the first half. However, in the 67th minute of the match, Rigio Topu scored a goal for Champion FC and in the 86th minute of the match, Tamuk Taja scored the second goal for Champion FC making the score board 2-0.