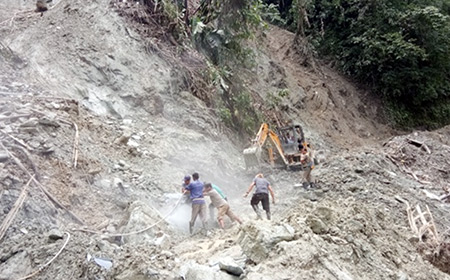 YINGKIONG, Jul 19: Troops of the Border Roads Organisation’s (BRO) 761 BRTF have reopened the Tuting-Pangin road which had been severely damaged by continuous rains.
“Complete road sector from Pangin to Tuting was opened for traffic in record time despite various odds and life-threatening conditions like sudden and heavy muck flow from uphill, shooting stones, incessant rains, and sinking hill slopes,” the BRO informed in a release.
Excessive rainfall in the last 100 days caused massive damages to the roads in Upper Siang district, including the Yingkiong-Pasighat, the Yingkiong-Aalo and the Yingkiong-Tuting roads. The BRO roads in these areas also suffered damages due to landslides, sinking, and blocks.
“Troops of the BRO deployed in these areas under the 761 BRTF, Project Brahmank, have worked continuously despite inclement and harsh weather conditions all throughout this devastating period,” the BRO said. (DIPRO)