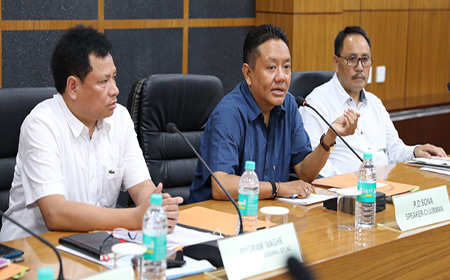 ITANAGAR, Jul 19: The integrated planning process for creation of infrastructures in the headquarters of the newly-created Lepa Rada, Shi-Yomi, Pakke-Kessang and Kamle districts was discussed during a consultative meeting held at the legislative assembly speaker’s conference hall here on Friday.
Presiding over the meeting, Speaker PD Sona, who also represents Shi-Yomi district as MLA, emphasized on “proper planning for the new districts and avoiding haphazard ways of doing things like in the past,” according to a release from the speaker’s media cell.
Citing the example of older districts “which where developed without proper planning and preparations,” the speaker said the roadmap for the development of the new districts should be prepared with proper planning to avoid problems in the future.
“Our planning should be on a 100-year concept,” Sona said, and emphasized on well-planned sewerage systems, roads, buildings, water supply, etc.
Highlighting the four major areas of water supply, electricity, communication and accommodation in the new districts, the speaker urged the district administrations and the line departments to work together to develop the new districts “as model districts.”
Pakke-Kessang MLA Biyuram Waghe also stressed on proper town planning, potable water supply, power, and accommodation. He asked the departments to prepare plans “on the basis of available land and resources, and leave no room for future discrepancies.”
Taking serious note of rising instances of encroachment on government land, Basar MLA Gokar Basar asked the district administrations to “stop individual land allotment system in government land meant for government infrastructures.”
Raga MLA Tarin Dakpe sought cooperation from all the departments and district administrations “for creation of model district headquarters in the new districts with proper planning.”
The deputy commissioners of the four districts, along with chief engineers, the directors of town planning and APEDA, and executive engineers of the four districts offered suggestions regarding infrastructural facilities in the new districts.
They highlighted the challenges being faced in the districts due to lack of proper accommodation and water and power supply. The officers also requested the MLAs of the four districts to look into the land acquisition process for early execution of developmental works.
Earlier, representatives of New Delhi-based EY Consulting made a PowerPoint presentation on how to move forward with the development of infrastructures in the new district headquarters.
The EY representatives will be in touch with the administrations of the new districts and help them in preparing an integrated planning process for the district headquarters, the release said.