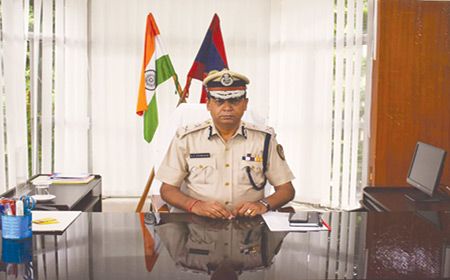 Staff Reporter
CHANDRANAGAR, Jul 27: New Director General of Police (DGP) of Arunachal Pradesh Police, RP Upadhyaya, took charge on Saturday in a ceremony at the police headquarters here. The DGP was welcomed with a guard of honour by the state police.
Upadhyaya, who belongs to the 1991 batch AGMUT cadre, replaces SBK Singh, who has been posted as the DGP of Mizoram.
Upadhyaya had first been posted in Arunachal in 1994 as ASP in Tirap district, and he served as the SP of East Kameng district from 1995 to 1997. He had joined as the commissioner to the governor in March this year.
Interacting with journalists, the DGP said, “We will do our best to provide professional police services to the people of this beautiful state. For this, I require a very happy and healthy force. The welfare of the force is my first priority, in terms of their housing, offices, and other benefits.
“I firmly believe that until and unless the force is properly trained, properly equipped, and has faith in their leadership, they will not be able to deliver,” Upadhayay said.
Stressing that the first and foremost duty of the police is protection of lives and properties of the citizens, he said two of the paramount areas of importance in the days to come would be to ensure a secure environment for all the citizens, and to improve police visibility.
“Each and every constable of us will feel like a part of this force, and they will do their best. We have to provide them with that kind of environment,” the DGP said.
In terms of capacity building, he said the priority would be on strengthening the police’s cyber capabilities and modernizing their training needs.
“I can assure you that it will be a very fair, merit-based and transparent administration, and those who are working hard and are honest and faithful to the department will be rewarded,” Upadhayay said.
The DGP also sought the media’s cooperation in making the state police effective.
He informed that after the celebration of 15 August, immediate steps would be taken to process the appointment of the aspirants on compassionate ground.
On being asked about the functioning of the SIT, the DGP said he would convene a review meeting in the coming days to obtain detailed analyses on the cases.