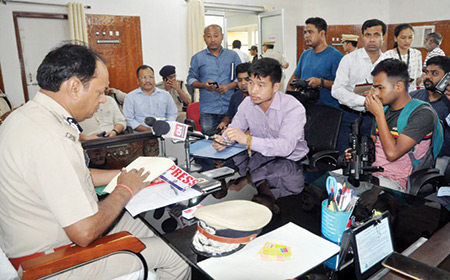 ITANAGAR, Jul 27: Seriously concerned over the rampant misuse of the press tag/sticker by many unregistered and self-proclaimed media persons and even printing presses, the state’s media bodies have come up with a new press sticker, which will contain the APUWJ and the APC logos.
The signatures of the respective presidents and a 23mm 3D hologram of the APUWJ logo will be pasted on the sticker to declare its authenticity.
In this regard, APUWJ President Amar Sangno submitted a representation to new DGP RP Upadhyaya on Saturday at the police headquarters here, on the sideline of the DGP’s media interaction programme.
Representations, along with copies of the new press sticker and hologram, have also been sent to all the SPs of the districts, seeking their cooperation and urging them to sensitize their officers and personnel.
The APUWJ and the APC have requested the new DGP to launch a drive to check the misuse of press tags/stickers.
“Some unrecognized individuals, newspaper distributing vendors/agencies, owners and employees of printing presses are also using press stickers which are actually meant only for those who are either reporters, photographers or videographers in the print and/or electronic media,” the representation stated.
The APUWJ and the APC have decided to issue press stickers only to genuine and verified employees of the state’s media houses, it added.
“They alone are entitled to use the press stickers issued by the both the media organisations. The use of any other press tag/sticker is not recognized by the APUWJ and the APC,” the press bodies said.
The APUWJ and the APC requested the DGP to check possible misuse of press tags/stickers by unscrupulous individuals and groups. Earlier this month, the press bodies had submitted copies of the new press sticker to the home minister and the home commissioner.