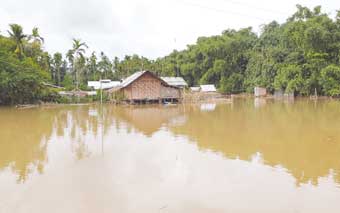 Staff Reporter
HOLLONGI, Aug 1: Fifteen houses in Dokum village in Patila-I here in Papum Pare district were partially submerged by floodwater between 31 July and 1 August.
Residents informed that they have lost poultry, cattle and other properties in the flood, and lamented that “no one from the administration” visited them to take stock of the situation.
Appealing to the administration and the government for immediate assistance, a resident informed: “It was around 3 am when a flashflood in Panka Nallah gushed into the village, inundating several houses and the locality.”
Another resident, Chera Nanu, said, “This is not the first time; it had happened last year, as well, and the then local MLA along with the DC had paid a visit, but no permanent solution was taken up. We are facing the same situation again. Our children are unable to go to school as several household materials have been damaged by the floodwater.”
Concerned that there could be an outbreak of diseases due to the stagnant water, Nanu and other residents demanded immediate intervention by the district administration and the local MLA to assist and support the affected families.
Nanu also claimed that the flashflood had been caused due to the diversion of Panka Nallah near the NDRF headquarters.
“There was a threat of flood for the past one week, and the flood did occur late last evening,” Nanu added.
Balijan EAC Mudo Tamo, who visited the area late Thursday afternoon, spoke to the affected families and asked them to be cautious during the night.
He said he has already informed the Balijan ADC about the situation, and that the ADC would visit the area on Friday morning.
The EAC said “immediate temporary measures” would be taken up to drain the floodwater from the area. A team of doctors will also visit the area to check on the health of the residents.
“Temporary arrangement is not a solution and we will recommend a permanent solution this time. Meanwhile, we urge the residents to remain alert and stay safe,” the EAC said.