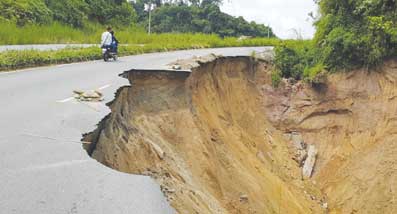 Staff Reporter
ITANAGAR, Aug 1: Hundreds of residents of the capital complex on Thursday appealed to the state government, particularly the highway department, to repair the dilapidated four-lane highway at several stretches between Itanagar and Hollongi.
A series of rain-triggered landslides in July damaged roads, including collector roads, in the capital region. The locals alleged that the administration and the department were not paying heed to the problems to the residents and commuters caused by the damages to the roads in several parts of Papum Pare district, including Balijan and Taraso circles.
“An earth mover and a tipper truck have been engaged, but they are not capable of clearing the road in Hollongi area due to continuous landslides,” said a resident of Hollongi. “The highway department needs to deploy adequate men and machinery.”
The commuters also requested the highway department to set up “danger signs” in vulnerable areas for the safety of the commuters.