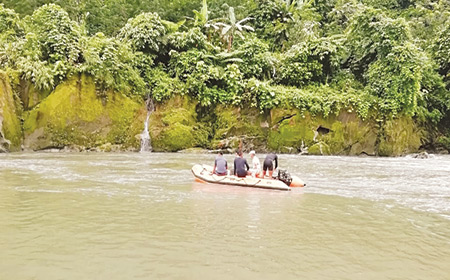 Staff Reporter
SHER, Aug 4: Search operation continues for the body of a 48-year-old man from Laba village (in Kurung Kumey district), who reportedly drowned in the Ranganadi river here in Papum Pare district on Saturday.
Kimin ADC Likha Tejji informed that the incident occurred when Tadar Kioda, a native of Laba who was residing at Damsite area in Naharlagun, was returning after having completed work at his rubber garden near the VKV in Sher.
Kioda along with a friend and a relative was crossing the Ranganadi river, at around 2 pm on Saturday, when
he was washed away by the river’s current.
Though two search teams were deployed on Saturday, the search was in vain and had to be discontinued because of the darkness.
On Sunday, several teams were constituted, comprising personnel of the NDRF, the ITBP and the police, officials of the administration, and local youths. They began their search operation in the morning, but due to the muddy water and the fast current of the river, the body could not be found till Monday.
“The search will continue on Monday also,” the ADC said at the time of writing.
He requested the people living on either bank of the river to remain alert during the monsoon.