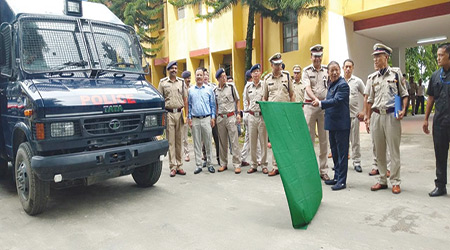 Staff Reporter
CHIMPU, Aug 4: Home Minister (HM) Bamang Felix flagged off the state’s first anti-riot vehicle, Vajra, at the police headquarters here on Sunday.
Speaking to reporters, Felix informed that the police department has launched five such vehicles, of which two will be stationed in Itanagar, and one each in Yupia, Pasighat and Bomdila.
He also informed that the department has sought another five anti-riot vehicles. “They are on the way, and, if needed, more will be brought,” Felix said.
The vehicle, which is fitted with an automated anti-riot gun that can fire teargas, battery backup, and sufficient space for police personnel, will help in crowd control during any protest, the HM said.
He expressed gratitude to Chief Minister Pema Khandu and Finance Minister Chowna Mein for taking steps to modernize the police department.
“The modernization of equipment in the police department is not to intimidate the people but to send a message to abide by the laws of the state,” he said.
Stating that maintaining law and order is also the moral responsibility of the citizens, Felix urged the people to support the police in order to bring a change in the law and order scenario “and create the most peaceful state in the country.”
On being asked about Friday’s arrest of an NSCN (U) operative, Wangchin Wangpan, the home minister said, “The investigation is on track, and if any more information is brought out by the department, the people will be informed about it.”