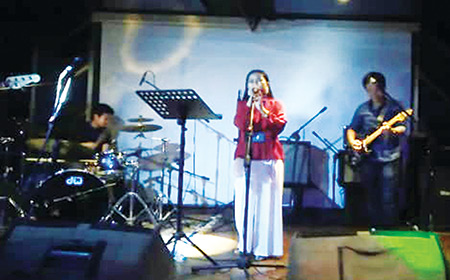 Staff Reporter
ITANAGAR, Aug 4: International Blues Music Day was celebrated on Saturday here in the capital for the first time by the Arunachal Independent Musicians Forum (AIMF), with Kolkata-based blues quartet, Big Family, taking the spotlight.
The day is celebrated across the world on the first Saturday of August each year.
Giving more details about the event, AIMF member Takar Nabam said, “The idea is to celebrate the essence of blues music and its importance in uniting different cultures and peoples across the world; to celebrate the music of the suppressed and use that as a vehicle for something positive in society.”
“We have been fortunate enough to have Ernie Ball and Fender recognize this event in our state and also make it possible for us to conduct a workshop on blues music (which had been held on Friday),” he added.
On whether the people here are ready for blues music, AIMF member Nicham Pul said the event was a small attempt to enable people to connect to blues music.
“We have to try new music and styles, and we hope to receive a positive response from the people,” he said.
Besides performances by the Big Family, Nabam, and Pul, other artists of the AIMF, including Inime Tacho, Vicky Tamang, Katem Apang, Samuel Pertin, Katem Apang and Teji Toko, gave exhilarating performances.
Also grabbing the attention of the audience were singer and scholar Liyir Karso and young female drummer prodigy Tomi Gamlin.
Versatile singer Dambi Jini performed an original composition, ‘Blues is the way’, besides ‘Gangster of love’.
Nearly 300 music lovers attended the event.
Earlier, on 2 August, a workshop on blues music had been held in Naharlagun by members of the Big Family.