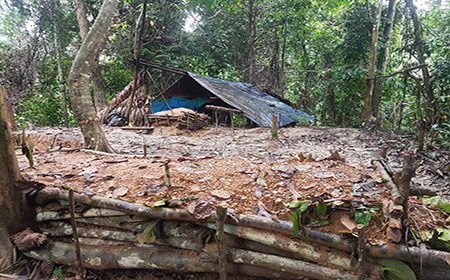 Staff Reporter
ITANAGAR, Aug 12: As part of the ongoing joint operations by the Changlang police and the Assam Rifles (AR) against underground (UG) groups in Changlang district, three camps of the NSCN (R) were reportedly destroyed last week.
Changlang SP Romil Baaniya informed The Arunachal Times that in the last one week three camps of the NSCN (R), in New Jukhi, Old Kamlao and Kovin Honkap, were traced and destroyed.
“Based on the inputs received and complaints regarding extortion activities by underground elements from the locals, the joint operation was carried out,” the SP said.
“Utensils, camouflage dresses, discarded food, beverages packet covers, etc, were recovered from the site.
“These camps were created in the last two years. For securing the camp, trenches were dug around it to take cover while engaging in exchange of fire,” Baaniya informed.
Over the last six months, weapons such as AK-47 rifles, along with ammunition and other warlike stores, besides drugs were found in some of the destroyed camps.
“Thirty-three operatives of various UG organizations have been arrested in the last six months in Changlang,” the SP added.