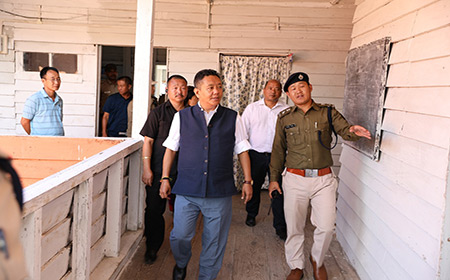 MECHUKA, Aug 16: Legislative Assembly Speaker PD Sona asked the government officers of Shi-Yomi district to work in unison for the development of the newly created district.
Sona said this while chairing a meeting with the heads of various government departments here on Friday.
“There will be lots of shortcomings and challenges for officials posted in the new district,” Sona said, and urged the officers to overcome the challenges and work in the greater interest of the district.
Stressing on proper planning to develop Shi-Yomi as a model district, Sona said every department should contribute towards the goal. “Structures should be constructed only after finalization of the detailed plans, in order to avoid future complicacies,” he said.
Assuring the officers of all possible help from his end, Sona called for coordinated efforts by every government official to fulfill the aspirations of the district’s people.
He also asked government officials, especially HoDs, not to leave their places of posting.
“Absence of government officers not only causes public inconvenience but also hampers developmental activities undertaken by the government,” he said, and also suggested to the officers to “go to schools in their free time and help the needy students in their studies.”
Emphasizing on development of the agriculture and horticulture sectors in the district, the speaker asked the departments concerned to create awareness among the farmers about cash crops and guide them on how to grow such crops.
Sona also expressed serious concern over the rampant killing of wild animals, especially endangered species, in the district, and told the forest department to check such activities and “create rigorous awareness among the villagers.”
He further asked the departments to ensure quality of work and timely completion of projects.
The HoDs placed their grievances and the issues confronting their departments in the district.
Some of the concerns highlighted by the HoDs were related to absence of ministerial staff, staff quarters, accommodation, renovation of office buildings, ambulance, water supply, shortage of subject teachers, land acquisition, etc.
Earlier, Shi-Yomi DC Mito Dirchi highlighted the roadmap for the development of the new district.
While assuring the departments of the administration’s support, the DC advocated changing the “working pattern.”
“We need to enhance our working pattern for all-round development of the district,” the DC said, and requested every department to ensure timely execution of works.
The Shi-Yomi SP and the Mechuka ADC also attended the meeting.
Later, Sona visited the community health centre and the police station here and took stock of the infrastructures. During interaction with the officials, he assured to look into their requirements. (PRO)