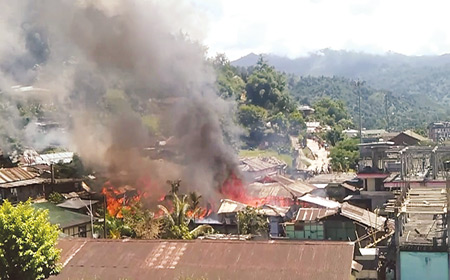 DAPORIJO, Aug 17: At least eight houses were reduced to ashes in two separate fire incidents, in Upper Subansiri and West Siang districts, in the last two days.
The fire in Upper Subansiri, which broke out in Abotani Colony here at around 10 am on Saturday, gutted at least seven houses, including government quarters. There were no reports of any casualty, and the cause of the fire is still not known. The fire was doused by fire tenders.
The properties lost or damaged are being assessed.
The fire in West Siang completely devastated the house
of one Morge Noshi, in Biru village, on Friday. The fire, which broke out at around 7 pm, also devoured the household properties, including a motorcycle, the West Siang DIPRO informed.
DDMO Nima Dorjee and the Aalo fire station OC rushed to the spot, on behalf of the district administration, to assess the situation and provide immediate relief to the affected family.
Executive members of the Galo Welfare Society also visited the spot and provided relief materials to the family.