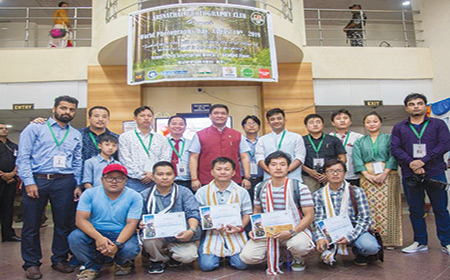 Staff Reporter
ITANAGAR, Aug 19: Joining the rest of the world, members of the Arunachal Photography Club (APC) celebrated World Photography Day on Monday by setting up an exhibition of photographs of exotic flora and fauna, landscapes, and the rich culture of Arunachal, at the civil secretariat here.
Chief Minister Pema Khandu, who inaugurated the exhibition, urged photographers and videographers of the state to document the rich cultural heritage and natural beauty of the state and showcase them to the world.
“You can become leading promoters of tourism while archiving the rich culture and scenic beauty of the state,” Khandu said.
The chief minister said tourism is one sector that can change the economy of Arunachal, adding
that “there’s no better way to lure tourists than professional portrayal of the state’s unique culture and places through pictures and videos.”
Recalling Prime Minister Narendra Modi’s exhortation to everyone to visit at least 15 destinations within the country once a year, specifically mentioning the Northeast region, Khandu said “it would boost tourism like never before in the region.”
The CM commended the APC for being the state’s premier and only registered photography organization, whose members hail from various backgrounds and professions.
“Despite being indigenous to the state, many of us do not know much about other tribes and places. I congratulate the members of the APC, who are voluntarily spreading awareness and bridging the gaps through their creative works,” Khandu said.
He assured the club of the state government’s support to its endeavours to promote Arunachal as a sought-after destination.
Inaugurating the APC’s website (which is under construction) the CM said it would provide “a superb platform” for amateur and professional photographers of the state to not only showcase their works to the world but also earn by selling their artworks to prospective buyers worldwide.
“It is, in fact, time our youths took up photography as a profession. The world is wide open and the sky is the limit for creative arts if taken up as a profession,” he said.
APC president Bengia Mrinal informed that the club was established in 2014 by a few enthusiasts, hobbyists and amateur photographers with different backgrounds, such as doctors, engineers, bankers, entrepreneurs, etc, and a few unemployed youths. The club now has 34 registered members from across the state.
“The idea of having a photo exhibition at the civil secretariat to mark this day is to showcase the beauty of Arunachal to our top government officers and officials, as they are the decision-makers of the highest level,” Mrinal said.
He expressed gratitude to the general administration secretary and the tourism secretary for making the event possible at the civil secretariat.
The chief minister also gave away the prizes to the winners of a photography contest that had been organized by the APC to mark the occasion.
John Taru Habung bagged the first prize, while Moge Riba and Jaju Pulu were the first and the second runner-up, respectively. Tadar Jamja received the ‘jury choice award’ for his endearing photograph of two children with a waterfall in the background. (With CMO input)