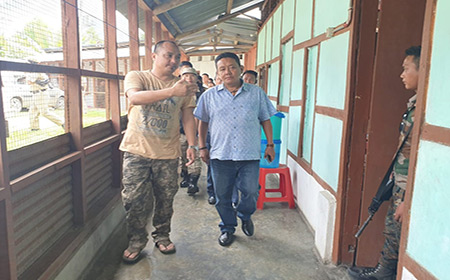 AALO, Aug 20: Legislative Assembly Speaker PD Sona on Tuesday visited the de-addiction-cum-rehabilitation centre at Hiker Gumin here in West Siang district.
Established in 2014 by NGO Mother’s Vision, the centre conducts de-addiction and rehabilitation programmes for those who are addicted to drugs, alcohol and other narcotic substances.
Twenty-three persons are currently being treated at the centre.
Sona lauded the centre’s staff for their yeoman services to needy people who are under the clutch of the drug menace.
Describing drug abuse as “one of the most dangerous social menaces,” the speaker suggested to the NGO to focus on preventive measures, apart from carrying out de-addiction and rehabilitation programmes.
“Prevention is better than cure,” the speaker said, and urged the people to support such noble activities. He also announced to contribute fund to the centre, and to extend all possible assistance from his end.
Informing that the centre is being run “on a self-help basis, without any other source or help,” resource person Kennedy Bagra requested the speaker to see if any help could be offered by the state government.
Mothers’ Vision chairman Jumde Yomgam Gamlin highlighted the NGO’s activities and its “movement against drug abuse.”
Sona also met the youths who are undergoing the ‘100 days de-addiction and rehabilitation programme’ at the centre.
Earlier, in the morning, the speaker attended a public meeting at Hone village in Shi-Yomi district, where he assured to fulfill the commitments he had made during his election campaign.
Stressing on accountability and transparency, Sona urged the youths of the district to help in maintaining the quality of work under various schemes and projects.
The people of five villages jointly submitted a memorandum to the speaker, seeking construction of volleyball grounds in all the five villages. (PRO)