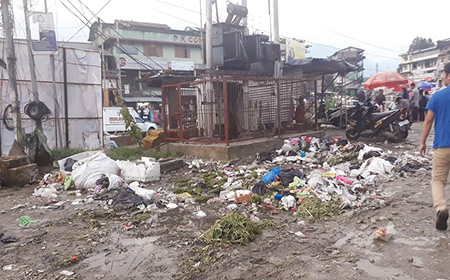 [ Amar Sangno ]
ITANAGAR, Aug 24: Bundles of waste wrapped up in black polythene bags and dumped along the roadsides in every sector of the capital complex are becoming a cause of anger among the residents as the Itanagar Municipal Council’s (IMC) sanitation trucks have reportedly not collected the wastes for a couple of days now.
In some sectors, sanitation labourers burned wastes, creating nauseating smoke that choked the residents.
“Since Friday, the IMC vehicle has not come to collect, and the dumped wastes are polluting the colony with their sickening odour,” said a resident of P Sector. Similar complaints have been received from the residents of ESS Sector and H Sector here.
“Since last Friday morning, the blaring signature music of the IMC has not been heard, and nor have they collected the wastes,” said Atok, a student.
On being contacted, the IMC authority informed that most of the sanitation trucks have broken down. The IMC has 30 sanitation trucks – one each for the 30 wards.
“Most of the sanitation vehicles are under repair. Sadly, many servicing centres and garages are refusing to repair the vehicles as we are unable to pay the dues,” said an IMC assistant engineer who wished not to be named.
“The government is yet to release the sanitation fund. Once it is released, garbage collection will be carried out effectively,” he said.
The sanitation trucks were purchased in 2015 and 2017, and some of the vehicles had been transferred from the urban development (UD) department when the municipality was created in 2013.
However, the government’s not releasing the sanitation funds on time is making it hard for the IMC to collect and dispose of wastes.
The IMC official also blamed the residents’ lack of civic sense, saying it is not possible to provide waste collection service without their cooperation.
“The citizens are not cooperating with us. We have collection schedules for each sector. But some of the residents do not hand over wastes when the sanitation vehicle arrives, and instead dump their garbage after the collection team has left,” he said.
Itanagar was listed as the third dirtiest city in the country in 2016, from among 476 cities surveyed by the Quality Council of India under the 2016 ‘swachh survekshan’ commissioned by the union UD ministry to review the sanitation and hygiene in 75 major municipals, including 53 cities with a population of above 10 lakhs, besides the state capitals.
Upon earning the ugly image, the authorities here had gone on a race by launching a massive sanitation campaign, engaging NGOs in each ward. Thirty NGOs were roped in, and more than 600 sanitation workers were recruited to improve the capital’s image and to win one of the biggest developmental lotteries – the smart city project.
However, the tempo and the energy eventually subsided, with the sanitation vehicles getting old and breaking down frequently, besides the sanitation workers not being paid their honorariums on time.
The IMC official said the authority is now planning to train dedicated sanitation labourers to ensure effective waste management by collecting wastes from every household and segregating dry waste and wet waste.
“We are planning to train dedicated sanitation labourers. They will be properly trained” he said.