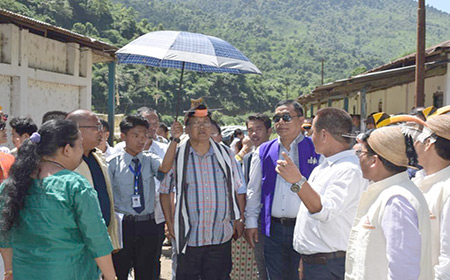 PABUA, Aug 24: As part its school adoption programme, the Nyishi Elite Society (NES) adopted the government secondary school (GSS) here in East Kameng district on Saturday.
Terming the day historic, MLA Tapuk Taku expressed gratitude to the NES for the initiative, and informed about the allocation of funds for the GSS under the CM’s Samasth Shiksha Yojana. He urged the students and the school authority to maintain the schools’ infrastructure.
The MLA also assured to pursue the matter of erecting a flood protection wall around the GSS, which stands along the Pacha river, and sought the NES’ cooperation in fulfilling the urgent need.
NES president Bengia Tolum said the objective of adopting schools is to bring holistic development in the education sector, particularly in the Nyishi inhabited districts, “through continuous monitoring and handholding of the adopted schools by developing them into model schools.”
The best performing school among the adopted schools will be felicitated every year, he said.
NES general secretary Heri Maring expressed appreciation for DC Gaurav Singh Rajawat for his personal initiative of taking classes at the government higher secondary school in Bazaar Line in Seppa, and urged all stakeholders to take on the onus of developing the education sector.
SMDC chairman Rajo Gyadi submitted a five-point memorandum to the NES team and requested for early posting of sufficient teachers, construction of a 100-bedded hostel, and speedy opening of bank accounts of all the students of the school.
A book titled Feminism: Theory & Practice, authored by Robin Hissang Tadung, the principal of the government model degree college in Wessang, was also released on the occasion.
Sports items were also distributed to the students by the East Kameng Social Welfare & Cultural Organisation during the programme. (DIPRO)