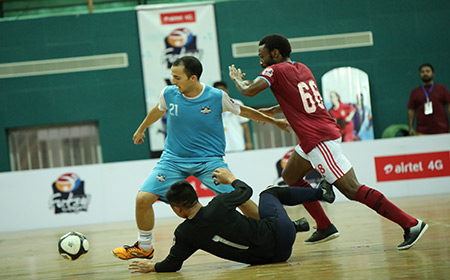 GUWAHATI, Aug 26: Arunachal Highlanders won their first match in the Northeast Futsal League (NEFL) against Meghalaya Thunders with a 2-1 score.
Playing for Arunachal, Paula Boza Gil from Spain became the first female player of the league to score. She scored both the goals for Arunachal Highlanders.
Francis was the lone scorer for Meghalaya Thunders.
In the second match, Mizo Falcons won against Apunba Manipur 3-2.
For Mizo Falcons, its captain Alan scored one and Michael scored two goals. Md Yasir and Md Shah Jahan scored one each for Manipur.
On 27 August, Apunba Manipur will be up against Assam Titans, while Arunachal Highlanders will face off against Nagaland Super 5.