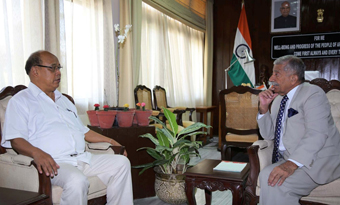 ITANAGAR, Aug 29: Governor BD Mishra and Textiles & Handicrafts Minister Tumke Bagra have stressed the need to revive the indigenous tribal looms and handicrafts to boost the rural economy.
They made the observation during a meeting at the Raj Bhavan here on Thursday when the minister called on the governor.
“Revival of indigenous looms, particularly the age-old practice of loin loom, will not only financially empower people but at the same time provide a sustainable avenue for employment,” Mishra said.
He suggested setting up a centre to impart training on loin looms and tribal handicrafts, saying “such initiative of the state government will encourage self-employment and entrepreneurship among the youths and keen unemployed homemakers.”
The governor advised Bagra, who is also in charge of the skill development department, to strengthen the districts’ crafts centres and industrial training centres. (Raj Bhavan)