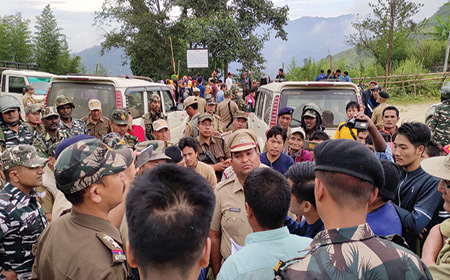 ITANAGAR, Aug 30: Hundreds of villagers, including women, were involved in a standoff on Friday against two companies of security personnel, led by the Lower Subansiri SP, at the boundary of Neelam village in Lower Subansiri district.
The SP and the security personnel, along with the EAC and the district horticulture officer had reportedly come “unannounced” to the village to assess alleged damages caused to horticulture crops in an area the ownership of which is currently being contested in the court.
The land in question covers an area measuring 211.31 hectares and is located in New Pania in Pistana circle of Lower Subansiri district. Its ownership is being contested by the villagers of Neelam and Likha Yana, mother of former MLA Likha Saaya, in the Itanagar permanent bench of the Gauhati High Court.
The villagers, headed by Neelam Area Development Committee (NADC) chairman Neelam Tani and Neelam Natural Resources Committee (NNRC) president Neelam Sanjay, argued that since the ownership of the area is being contested by the two parties in the court, the administration should have informed them in advance about the assessment.
The duo argued that since both the parties are stakeholders in the matter, representatives from both sides should be present during such assessment, if it is to be conducted.
Later, the officials had to turn back without conducting the assessment, following their failure to furnish a copy of the official order supposedly issued by the deputy commissioner, based on which the assessment had been meant to be carried out.
Speaking to media persons, NNRC president Sanjay said since the matter is civil in nature, the involvement of the law enforcing authority was unwarranted, “especially the requisition of two companies of security personnel.”
On the ownership of the land in question, he said the Lower Subansiri DC had in an order on 16 May cancelled the land possession certificate (LPC) issued against the land in favour of Yana.
SP Hemant Tiwari on his part informed that they were there to “only assess the alleged damages to the horticulture crops and not for the title suit in any way.”
He said they had to bring the forces along because someone had on a previous occasion thwarted an attempt to carry out assessment by “intimidating the officials.”
Regarding their failure to furnish the official order for the assessment, the SP reiterated that they were there to only assess the alleged damages, and that it wouldn’t have had any impact on the claim of ownership by either party.
“Had the villagers secured an order from the CJM to vacate the land following the cancellation of the LPC, the authorities concerned would have removed the horticulture crops themselves, but the crops were damaged by unidentified persons, which was illegal,” Tiwari said, adding that they were there to assess that damage only.
Meanwhile, the officials and the villagers headed by the NADC and the NNRC decided to have a meeting, involving all the stakeholders, before undertaking any further action in the matter.