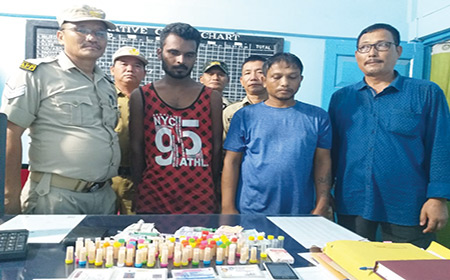 Staff Reporter
NAHARLAGUN, Aug 31: The Naharlagun police arrested two drug peddlers, identified as Moon Das and Gautam Das, from Banderdewa on 26 August, and seized a hefty quantity of suspected narcotic drugs, including heroin, from their possession.
Moon is a native of Kamrup district, while Gautam is from Morigaon district, both in Assam.
Acting on a tip-off, a police team comprising Banderdewa PS OC, SI RK Jha, and four other police personnel, under the direct supervision of Capital SP Tumme Amo and Naharlagun SDPO R Kamsi, arrested the duo with the suspected drugs and other items like cash and mobile phones.
A case has been registered in this regard at the Banderdewa police station, under Section 22 of the NDPS Act, and the matter is under investigation.
Another drug racket was busted on 28 August after police received information that drug peddlers were carrying narcotic drugs in a Mahindra Scorpio car
for supplying in Itanagar area, the SP informed.
“The naka at the Banderdewa gate was alerted, and the Scorpio, driven by one Ligam Sora, who was accompanied by one Budak Ramching, was intercepted. They were detained along with the Scorpio,” the SP said.
During search, a large quantity of suspected contraband drugs and other items were recovered from the vehicle.
The vehicle was seized, and a case has been registered at the Banderdewa police station under Section 22/27 of the NDPS Act.
The SP informed reporters that “the peddlers have been arrested and interrogated, and they revealed that they had purchased the drugs from one Rajiv Doley (42) of Banderdewa (Assam).”
Doley, a native of Jonai district in Assam, “was trapped, and 10 vials of brown sugar (heroin) were seized from his possession,” the SP said, adding: “Raids are in progress to bust the supply chain.”