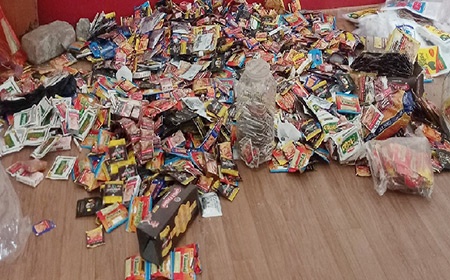 PASIGHAT, Aug 31: A large quantity of tobacco products, including gutka, pan masala, khaini (chewing tobacco), etc, was seized during raids carried out by a police team, led by Judicial Magistrate Sanjay Taram, at various outlets here in East Siang district under the Cigarettes and Other Tobacco Products Act (COTPA) on Saturday.
“The sellers were illegally selling these products within 100 metres distance of educational institutions in the township, which is punishable under the COTPA,” Taram said.
Though no penalty was imposed on the offenders this time, the magistrate warned them against selling such products again.
Meanwhile, Deputy Commissioner Kinny Singh said no tobacco product can be sold to any person under the age of 18 years.
“The seller is mandated to ensure that the person who is buying the tobacco product is not a minor. A display board must be put up at the point of sale, declaring that sale of tobacco products to minors is prohibited,” she said.
“A display board must be put up outside the authority of every educational institution, declaring the same,” she added. (DIPRO)