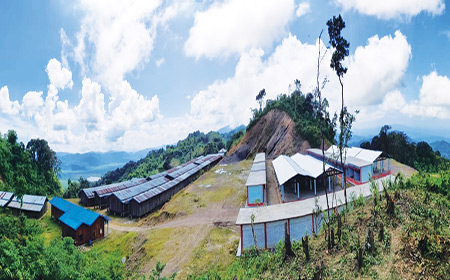 Correspondent
NAMPONG, Sep 3: Built at a whopping cost of Rs 3.53 crore, the border haat at the Pangsau Pass international border’s Pillar No 173 will be commissioned soon, and it is expected to simplify border trade in the area.
The massive project is the result of Nampong MLA Laisam Simai’s efforts to raise the local economy and generate an alternative livelihood source for the locals. The project had been sanctioned in 2016.
On the sideline of the recent visit of the governor, Simai commended the extraordinary effort made by the Jairampur DUDA to complete the construction work despite obstacles thrown its way by nature.
“I’m extremely hopeful that the locals will extract maximum benefits from the opportunity that the border haat is going to open up for them,” said Simai.
DUDA Deputy Director George Joseph said the delay in commissioning the project had been caused by natural calamities like landslides and roadblocks. He also revealed that initially there was an “internal border dispute with the locals, which was sorted out before it could create more hurdles.”
The border haat will consist of 42 shops, a warehouse, a dumping yard, a security barrack, a common toilet, and a parking lot for trucks.